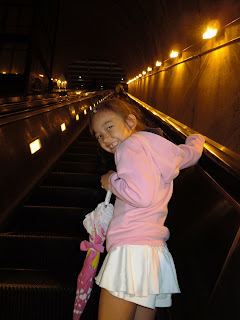 My daughter rides the vertiginous escalator inside the Rosslyn Metro station

What's up with the weather? Until a couple of days ago, we were sweltering in the muggy soup of 90+ degree temperatures (Fahrenheit, that is) and high humidity levels. Now the temps are barely in the 70's F (note Amber's windbreaker in the above picture) and the rain has been a constant presence all day today. Welcome to the east coast, I guess.

And welcome to Georgetown. The District of Columbia's most prestigious...um, district, home to many of Washington's most powerful...er, power brokers and a magnet for tourists from near and far beckoned us despite the change in the weather, and we answered the call. A quick ride on the Metro to Rosslyn, followed by an even quicker ride across the Key Bridge on the DC Circulator bus found us at the intersection of M Street and Wisconsin Avenue, in the heart of Georgetown's tourist zone. Join me on a brief photographic compendium of our Saturday afternoon in "the most obsessively political residential enclave in the world", according to Jan Morris (and The Rough Guide to Washington, DC).

The first thing we took care of was to have lunch, which we did at a pseudo-British pub called The Guards. The food and service were OK, but the prices were more reasonable than many of the overpriced dining establishments along M Street. Suitably fortified, we paid a visit to The Old Stone House. Dating from 1766, it's the only pre-American Revolution house in Washington still standing: 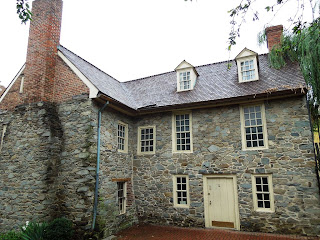 The small garden behind the home provided a quiet break from the hubbub of M Street. It looked and felt like I was back in Olde England - if Albion had giant willow trees, that is: 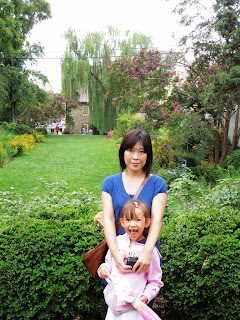 Inside, it's possible to have a gander at some of the rooms. The clock in the second-floor dining room is the only piece of furniture from the original house. I was surprised to learn that only the upstairs child's room had a closet due to a "closet tax" imposed by the British authorities. I was also surprised to find out that the reason the ceilings were so low wasn't because the colonialists were such wee folk (Washington and Jefferson were almost as tall as me), but were a mechanism to keep the interior from losing heat. I'm easily surprised: 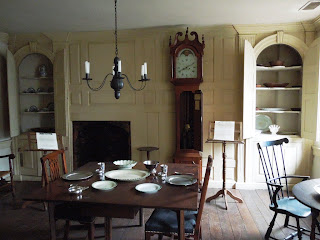 Leaving The Old Stone House and M Street behind (albeit temporarily), we took a stroll along N Street for a few blocks, admiring the townhouses that we know we're never going to afford. To Pamela, it was like being in a much-cleaned up version of Taiwan: 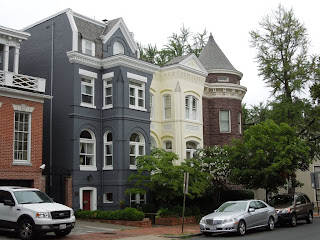 No. 3307 was the residence of John Fitzgerald Kennedy and Jacqueline Bouvier Kennedy from 1957 to 1961, when they moved to some larger digs at 1600 Pennsylvania Avenue. The house next door is up for sale, but is undoubtedly out of our price range. Still, it would be something to say I live next door to where JFK used to reside: 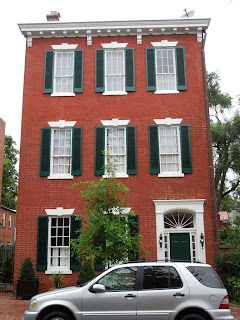 As if to drive the comparisons to Taiwan home, on our way back down to M Street, we passed by a long line of people standing on the sidewalk. They were all waiting to be admitted into Georgetown Cupcake, where the TV series DC Cupcakes was filmed. And they were still out there when the rain came down, patiently waiting to buy...cupcakes. America has changed a lot since I first left in the late 1980's. While I welcome the craft beer revolution, I could've done without reality TV: 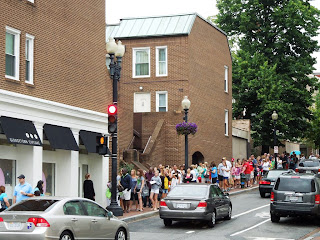 After wandering around some more, we found ourselves back at the intersection of M and Wisconsin, presided over by the old Riggs (now PNC) National Bank: 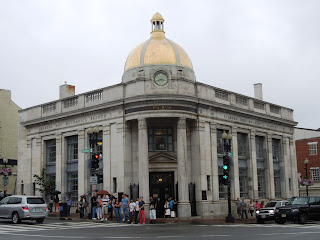 Venturing onto Wisconsin Avenue, we stopped for a glass of iced Jasmine green tea (me) and a couple of marble tea eggs (my wife and daughter) at a Chinese-style tea house. We also popped into a spice shop, where Amber and I sniffed a lot of the wares and Pamela bought some paprika and a grilled fish blend: 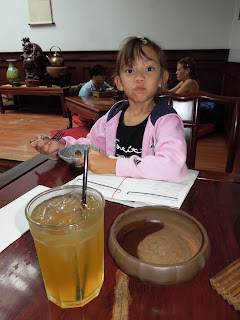 Eventually, we made our way back to the DC Circulator bus stop for the return trip to Rosslyn and home. We'll be back when the weather turns nicer, to visit the C&O Canal. Plus I want to see the steps where Father Karras landed after jumping out of Linda Blair's bedroom window: 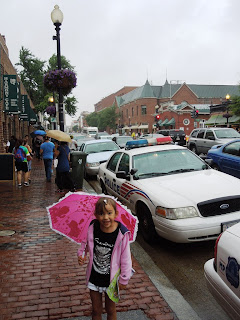