Here in the land where property is apparently never returned to its rightful owners (for that is a trait unique to Taiwan and the Taiwanese, at least judging from some of the comments generated by certain Facebook posts), it's a jungle out there. At least that's how it felt at times for the Kaminoge family as we forayed into the forest this afternoon. Spurred on by a book I bought a couple of weeks ago in Georgetown called AMC's Best Day Hikes Near Washington, D.C., we drove next door to Maryland to the Patuxent River State Park, which not so coincidentally is also Trip #1 in the aforementioned hiking book. For two hours we looped along overgrown paths, cutting our skin on thorns (my legs and arms were bleeding from numerous small scratches), hacking our way through spider webs and, though we didn't know it at the time, amassing a collection of ticks as we tramped in the woods.

My daughter and I had a wonderful time, and will do this again next weekend, weather permitting. My wife was miserable, and is looking forward to trying out her new Macy's charge card while spouse and offspring are off communing with the Great Outdoors. 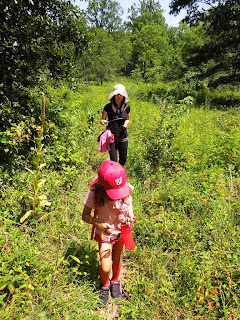 Amber and Pamela make their way in 'Nam in the summer of 1969, keeping a wary eye out for Punji stakes laid down by Charlie. 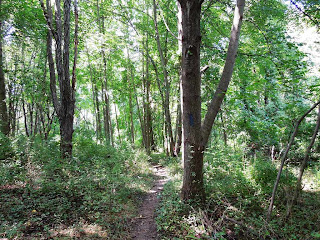 At times the trails were difficult to make out, and we had to pay attention to colored blazes marked on trees. At other points only the visually-challenged would've had a hard time figuring out which way to go. 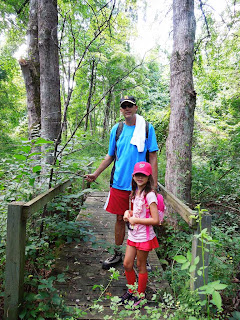 Dad and daughter crossed that bridge when they came to it. I was on point, which meant carrying a stick and waving it up and down in front of me like an idiot in order to break up the many webs strung across the paths. Nonetheless, I still ended up a sticky mess a few times. 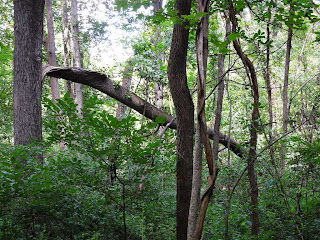 Part of this tree appeared to have been peeled like a banana, presumably as a result of June's derecho windstorm. 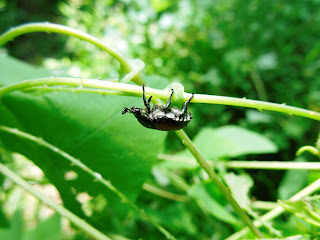 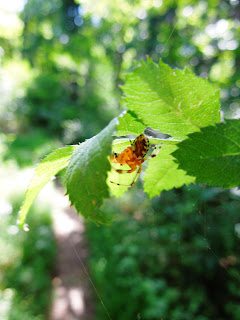 Today's outing was somewhat disappointing in that, while we encountered plenty of insects, we didn't see any animals. However, there were a couple of odd moments. At one point, we came across a very large, and still fresh, dung pile. Soon after, something heavy fell down to the ground from the trees somewhere in front of us, followed almost immediately by the sound of something else crashing loudly through the branches behind us. It was almost like being back in Taiwan, where the Formosan Macaques are the kindest by far of any monkey genus in the world.

Oh, yeah, I mentioned ticks earlier. Upon returning to the car, I found one of the little bloodsuckers on my arm. We thereupon drove home, where I showered, changed my clothes and sprayed some Bactine on my thorn wounds. Several hours after completing our two-mile (3.2 kilometers) hike, this is what I found on my daughter's arm as we sat down to await our dinner at Elevation Burger: 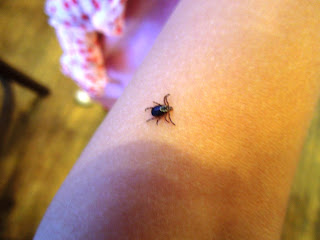 A discovery which didn't seem to have any effect at all on my daughter's appetite: 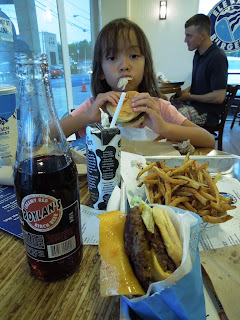