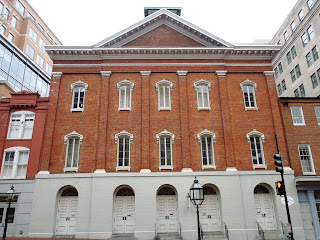 You might not recognize the building pictured above, but the name should be familiar. Ford's Theatre, of course, was the place where John Wilkes Booth shot Abraham Lincoln in the back of the head on the evening of April 14, 1865, as the president and his wife, Mary Todd Lincoln, were watching a performance of Our American Cousin. Now a National Historic Site, the renovated and restored theater is well worth a visit should you find yourself in Washington, D.C. 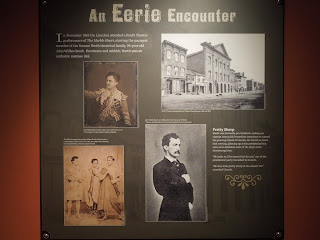 After picking up your (free) tickets inside, you proceed first to the museum area, the displays of which cover Lincoln's time in office beginning with his first term as president in early 1861, and running up to the assassination. "An Eerie Encounter" describes how Lincoln witnessed his future-killer perform onstage at Ford's Theatre one evening in November 1863:

Booth was fervently pro-Southern, making no attempt among his immediate associates to conceal his growing hatred of Lincoln. He hinted as much that evening, glancing up at the presidential box even as he delivered some of the play's most threatening lines.

"He looks as if he meant that for you", one of the presidential party remarked to Lincoln.

"He does look pretty sharp at me, doesn't he?" conceded Lincoln. 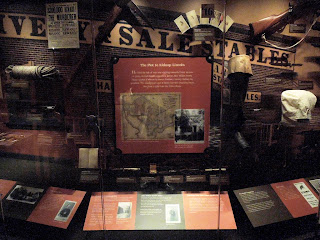 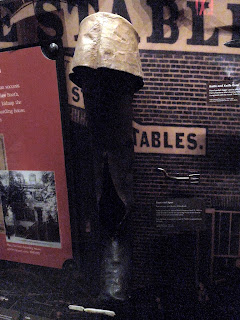 The museum has a number of items used by Booth and his cohorts in their assassination plot. Above is the boot Booth wore when he shot the president, and then broke his leg jumping onto the stage from the presidential box, before running (hobbling?) out the back door of the theater, where a horse was waiting for him. The hole in the boot was made by Samuel Mudd, the doctor who treated Booth. Mudd, who may or may not have known about the plot, was sentenced to life in prison but was later pardoned for his role in treating a yellow fever outbreak at the prison where he was serving his sentence. 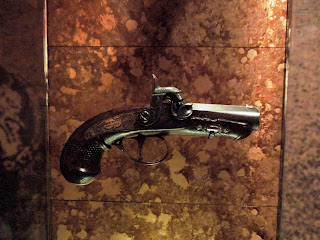 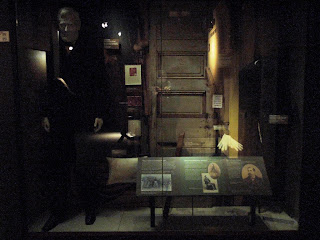 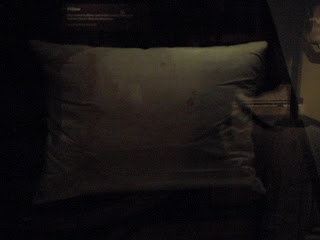 The lighting made photography difficult, but we could see the clothes Lincoln was wearing that fateful evening, the door to the presidential box and the bloodstained pillow from the bed where Lincoln died the following morning (April 15) at 7:22 am. 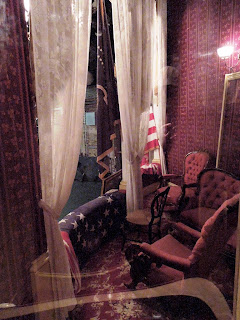 The Presidential Box at Ford's Theatre. Lincoln sat in the rocking chair in the front of the picture, while his wife sat next to him. The other occupants in the box that evening were Army Major Henry Rathbone and his fiancée (and later wife) Clara Harris. Rathbone was stabbed in his left arm by Booth after Lincoln had been shot (Rathbone survived, but his life took a very tragic turn years later). 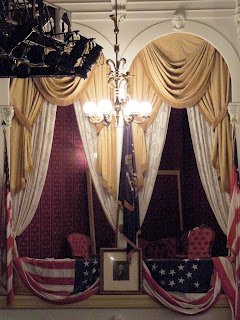 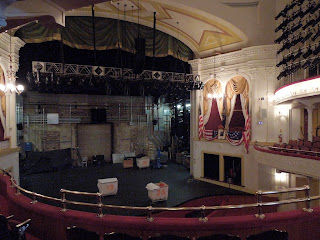 Inside Ford's Theatre, with Lincoln's booth pictured on the right 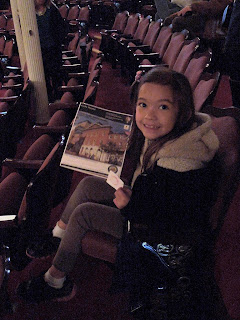 My daughter inside Ford's Theatre 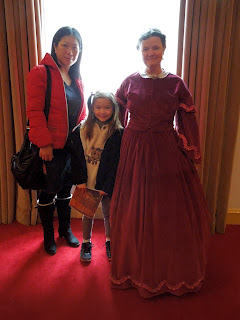 This guide not only graciously agreed to have her photo taken with my wife and my daughter, but she also politely answered the stupid question I posed to her - namely, where did the theatergoers go when they had to heed the call of nature? The answer was that men could use the privy at a saloon adjacent to the theater, but women had no recourse but to make sure they didn't eat or drink anything before going out to an evening at the theater. She also told me that this was the first question she asked when took this job! 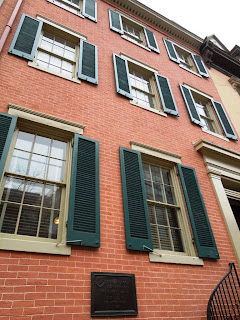 Once done at Ford's Theatre, you make your way across the street to the Petersen House. It was to this tailor's house that Lincoln was carried after being shot, and where he died the following morning. 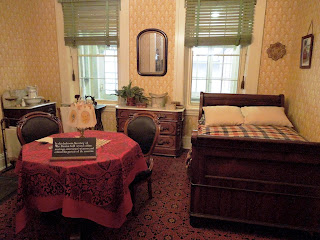 In this bedroom, Secretary of War (Edwin) Stanton held several cabinet meetings, interviewed several witnesses, and ordered the pursuit of the assassins. 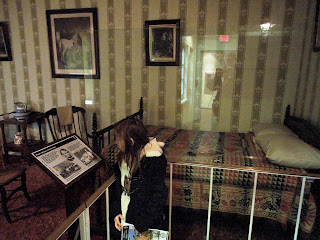 The bedroom where Lincoln died (the original bed is in a history museum in Chicago). Amber reads a description of the room and what occurred within, with her dad providing suitably ghostly accompaniment. 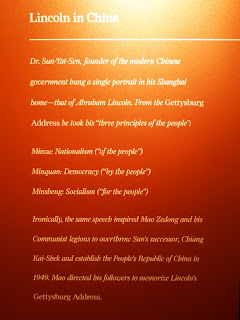 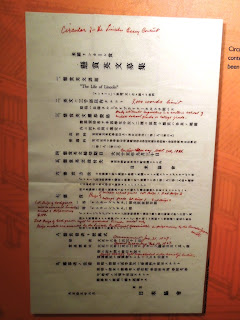 The rest of the Petersen House includes further museum displays, going over the capture and killing of Booth, and the trials and executions/imprisonments of his co-conspirators. Other exhibits cover Lincoln's place in culture and history, both here in the United States and abroad. The sign at the top explains how Sun Yat-sen 孫中山 ripped off...er, was influenced by Lincoln's Gettysburg Address when he came up with his "Three Principles of the People" 三民主義. The bottom photo is of a circular from an annual Abraham Lincoln essay contest that started in Japan in 1926 (following similar contests in the U.S. in preceding years). 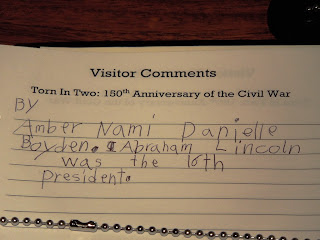 The comment left by my daughter as we finished our tour of the Ford's Theatre National Historic Site. 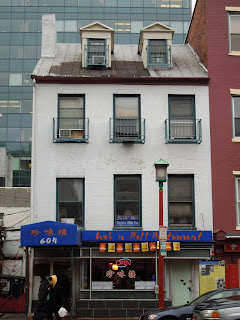 After our visit, we walked the several blocks over to Washington's pathetically poor and virtually non-existent Chinatown to have lunch. In an unexpected development, we ended up eating at a cafe located across the street from the site of Mary Surratt's boarding house, where Booth and his accomplices hatched their plot to kill Lincoln. The original building is now the home of the Wok n Roll Restaurant. You can't make this shit up. :-)