Mine eyes have seen the glory of a hole-in-one 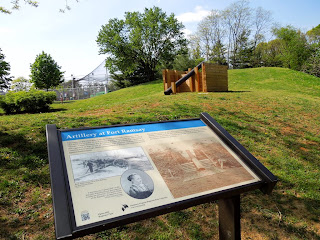 Everything now and then, a seemingly innocuous family outing on a sunny Saturday afternoon turns up a few surprises. Not far from where we live is a place called Upton Hill Regional Park, home to some batting cages, a miniature golf course and, in the summer, a water park (Amber had a good time there last year). Like many places in this area, the hill has a Civil War connection. The sign above explains how both the Union and Confederate forces used fake cannons in order to fool the other side, and there's a mockup of one such ersatz artillery piece in the background of the photo. What's more interesting, however, is that this very hill was the inspiration for Julia Ward Howe's Battle Hymn of the Republic. It seems Howe was so impressed with a review of the troops she saw on Upton Hill that she went home and composed the poem which, when combined with the music to John Brown's Body, became one of the one of the most popular and well-known songs in American history. You can read all about it in this surprisingly detailed Wikipedia entry on Upton Hill. There's also this Northern Virginia Regional Parks page which has a short video on the Civil War history of Upton Hill. 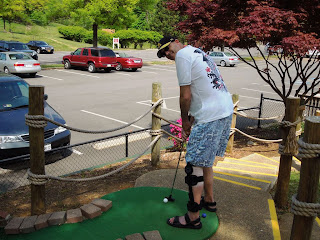 You won't find me listed in Wikipedia, but you would've seen me this afternoon cutting a dashing, if hobbling, figure on the mini-golf links. Just another step in the rehabilitation process. 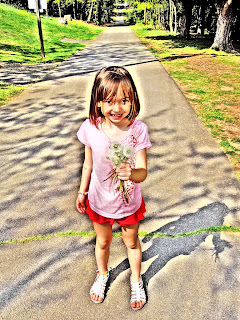 The demands of collecting dandelions occupied my daughter's attention following the family golf tourney (in which she bested her mother).