That was the week that was in Vilnius

This week's post has no coherent or liner theme, just a series of random pics taken in the last few days...

It's "New Circus Weekend" in Vilnius, with various circus acts from Belgium, Finland, France and Spain performing at venues all over town, with some performances free of charge. My daughter and I on Thursday evening caught a free acrobatic performance on Thursday at Arts Printing House by Joan Català. From the booklet that was handed out prior to the start of the performance:

Choreography of the show is...filled with traditional Catalan culture elements, for example - building of a human pyramid called "anxaneta". For that the performer takes a huge wooden log, ropes and...a few audience members. An audience will get to watch a very dangerous-looking climb to the top of the log, held by four men from the audience.

Fortunately I wasn't one of the four asked to take part. A good time was had by all present: 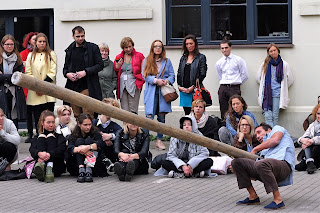 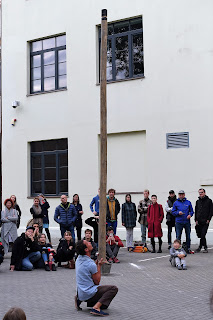 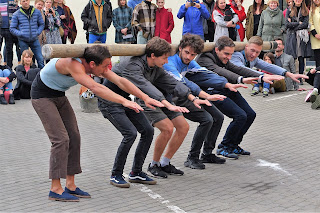 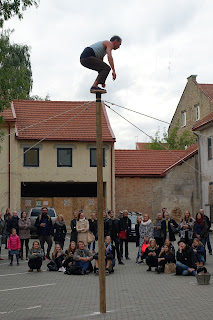 On Saturday I was able to convince my she-who-likes-to-stay-at-home spouse to join us for a walk in the woods. The place was the "cognitive track" of the Varnikai Botanical-Zoological Preserve, located off the road between Vilnius and Trakai. Lithuania is in the midst of the annual mushroom-picking season, so the forest was filled with families foraging for fungi: 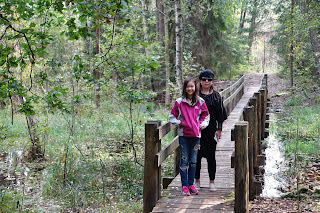 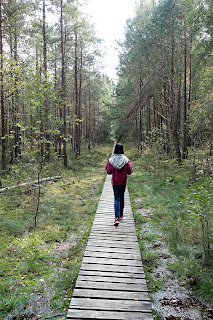 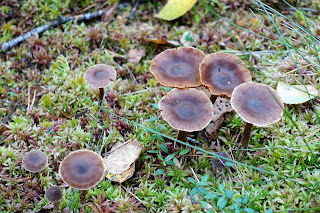 A few that have gotten away...for now. Or are they the poisonous kind? 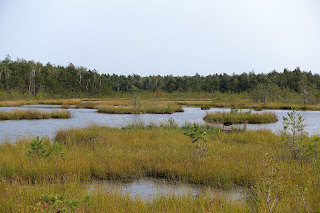 Notice the chair placed by the water 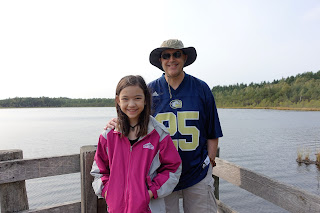 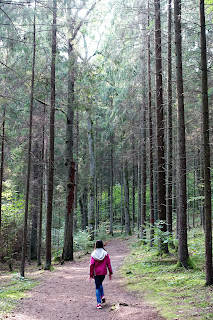 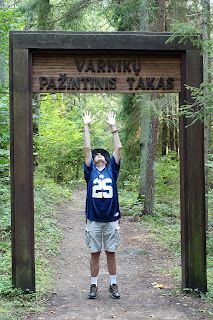 On Saturday evening on Gedimino Prospektas and what looked like a TV commercial shoot taking place, with extras sitting in parked cars: 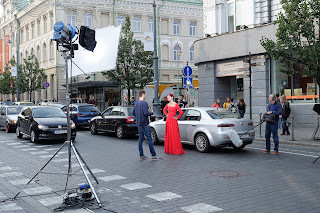 Shu-E had a toothache and didn't feel like going out to eat on Saturday, so Amber and I had a dinner date for two. My daughter chose Renè, a local Belgian favorite, where she drew on the paper tablecloth (an encouraged activity) and ordered a pot of mussels. I debated having rabbit or venison, before finally deciding on Bambi: 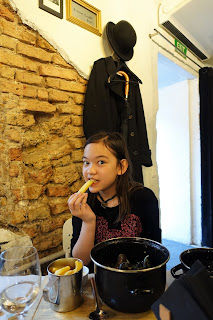 There was an almost-full orange moon looming over the city on Saturday night, but even with a tripod, my camera made the orb look more like a sun than a satellite: 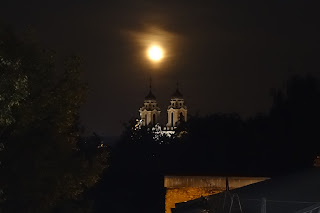 On Sunday afternoon I went out for a bike ride, with my intended destination being LITEXPO (Lithuanian Exhibition and Congress Center), located about eight kilometers from our apartment. LITEXPO was playing host this weekend to "Now Japan", but I decided to give it a pass as my Japanophilia (ugh, that sounds bad) doesn't extend to anime アニメ, manga 漫画, J-POP, maid cafès メイド喫茶, cosplay コスプレ or any of the other kitsch things that seem to appeal to so many younger Japanophiles. I made it as far as the TV tower before deciding to head back home: 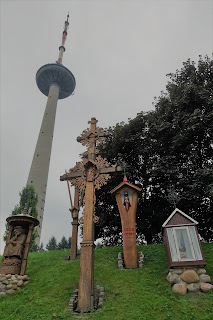 The problem was that my phone GPS kept directing me to go along busy highways that lacked both bike lanes and sidewalks, so it took a lot of head-scratching and riding around aimlessly before I was finally able to find a safe route back. Not to mention a few dead ends, like this "bridge" that my GPS wanted to me to use to cross the Neris: 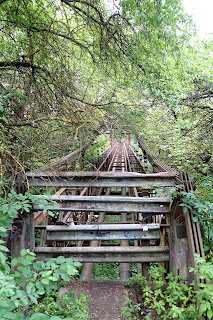 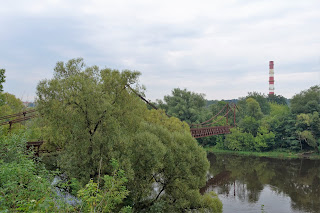 I was able to find a more pedestrian-friendly bridge further along the river, but the final obstacle was a huge traffic circle. Cyclists and pedestrians have to use a series of tunnels to navigate the roundabout. The view from inside - like being in the eye of a hurricane (and note the road passing through the middle):