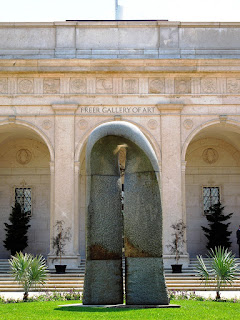 The second (and last) chance at passing my Mandarin Chinese exam is fast approaching - I've been studying even harder and more frequently, working on improving my still-poor listening and speaking skills. I've also sought counseling in an attempt to overcome the very real anxiety I'm feeling about a testing regimen designed not with people like me in mind. Still, everyone needs a break now and then, and this afternoon I paid a visit to my favorite of all the museums in Washington, D.C. - the National Museum of Asian Art, or to be more specific, the Arthur M. Sackler Gallery. Today was the third time I've dropped by the Sackler and/or the Freer Gallery of Art, the two galleries that make up the museum. As someone who 对 Japanese art 感兴趣, I generally prefer to check out the Freer, which has one of the best such collections in the United States; the Sackler, meanwhile, is most noted for its "Arts of China" collection. However, the Sackler is currently running an exhibition entitled "Hand-Held: Gerhard Pulverer's Japanese Illustrated Books" through August 11. As a brochure describes it:

Woodblock-printed illustrated books became key sources of knowledge and entertainment in Japan during the Edo period 江戸時代 (1615-1868). Working with renowned artists and authors, enterprising publishers produced compact, inexpensive paperbound volumes that were sold and circulated throughout Japan. With beautiful, intriguing, and entertaining subjects, books brought reading of words and images to the masses, creating a communication revolution similar to electronic media today. Highlights from the Gerhard Pulverer Collection now in the Freer Gallery of Art, including rare private editions and bestsellers such as Hokusai's 葛飾北斎 "Manga" 漫画 sketchbooks, are shown together for the first time since the museum purchased the collection in 2007.

Unfortunately, I can't show you any of this, as photography wasn't permitted. Obviously, if you have any kind of interest in Japanese woodblock print illustrated books, you should stop by the Sackler Gallery to check out the exhibition.

As for the test - the odds of passing I put at 50/50 at best -, if I don't reach my goal, I suppose I can always place the blame for failing to do so on distractions like today's. 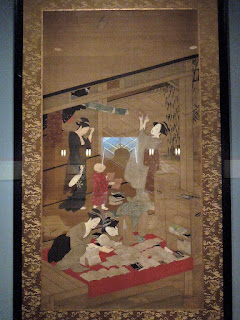 These were the only photographs I was able to take inside the gallery before a security guard politely informed me that photography wasn't permitted. The above scroll (dating from the late 18th century) is entitled Women Airing Books and Clothes, and depicts several women doing just that, an annual autumn ritual known as mushiboshi 虫干し. 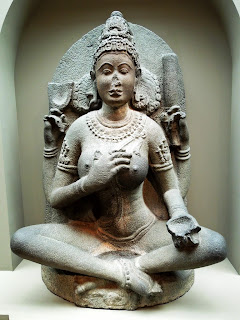 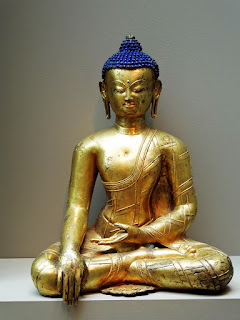 A nearby room had an impressive collection of statuary from South Asia, including these two works. There was also an exhibition called One Man's Search for Ancient China: the Paul Singer Collection. However, by this point in my studies, I'm pretty much sick and tired of anything Sino-related, so I gave this one only a cursory walk-through. Still, I would minding having an apartment like the one Singer lived in, which was stuffed with over 5000 objects collected over a seventy-year period.

I don't think my wife would be too pleased, however.