In last week's episode, the Kaminoge family visited the Antietam National Battlefield, site of the bloodiest single day in American military history. This afternoon, your humble scribe made a solo sojourn to the Manassas National Battlefield Park, supposedly less than half-an-hour by car from Falls Church, except when traffic on Interstate 66 heading west is stop-and-go, which is was what is was like today around noon. Two major battles of the American Civil War were fought there, the First Battle of Bull Run (which was also the first major clash of the war) on July 21, 1861 and the Second Battle of Bull Run from August 28 to the 30, 1862. In both battles, the Union forces were soundly defeated.

Today's walk was longer than last week's, but the heat, while still warm, felt a lot less oppressive. Today, in fact, was supposed to have been rainy due to a tropical storm in the southern part of the U.S., but it actually turned out to be very sunny. I followed the First Manassas Trail on a 5.4 mile (8.7 kilometers) loop around the battlefield site. The length of the trail meant that I was alone for much of the time, and other than the cicadas (more on them, later) and the two times I had to cross US 29, it was a very peaceful trek. I would like definitely like to do more of these Civil War-related hikes/walks in the future. 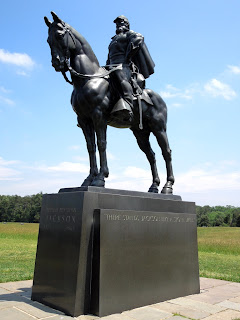 A statue of the traitor defender of an immoral way of life hero of the Northern War of Aggression, Confederate General Thomas "Stonewall" Jackson. Jackson received his nickname during the First Battle of Bull Run, when the arrival of his brigade helped the Confederate forces turn the tide against their Union foes on Henry House Hill, where this statue stands. When the southern general Barnard Bee saw Jackson and his men arriving on the scene, he encouraged his troops by yelling "There is Jackson standing like a stone wall. Let us determine to die here, and we will conquer. Rally behind the Virginians!". The First Manassas Trail starts out by going through the same woods that Jackson's men used to reach the battlefield. 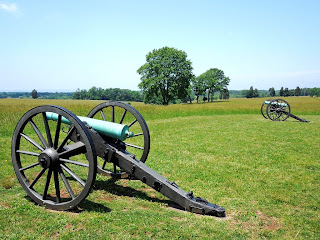 Just before entering the woods, the trail passes by some cannons. The grass in the background has been left to grow high in order to recreate the sea of weeds that existed during the time of the battles.

Much has been made in the local media recently about Brood II, the larger-than-usual cluster of cicadas that burrow out of the ground after a 17-year existence, and make the above-sounding racket as the males seek mates. This was the soundtrack that accompanied me as I made my 3½-hour walk along the trail, and I noticed the cicadas sound different from those that I had grown accustomed to during summers in Japan and Taiwan. 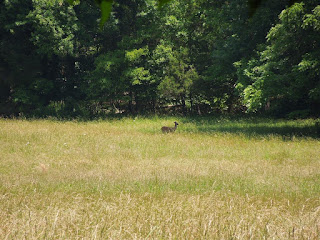 It isn't the best of photos, but it was the only shot I could get of a deer standing at the opposite end of a large clearing. It ran away before I could get any closer. A few minutes later, I was checking out a cicada husk on the ground. As I looked up, I noticed a deer looking at me just a few feet away, but it fled before I could react. Later on, I came across a third deer walking along the trail ahead of me. I tried to get a picture, but the best I could do was to get a shot of its rear end, and not a particularly good one at that (the photo, I mean, and not the deer, which had a fine ass). 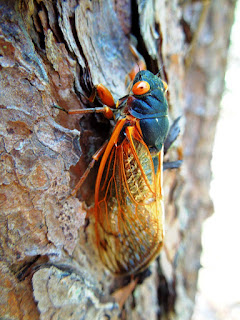 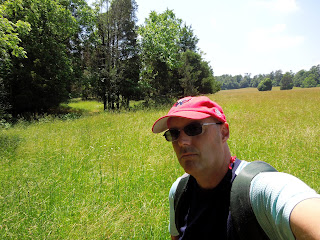 The scenery along the First Manassas Trail frequently alternated between shaded woods and open clearings. 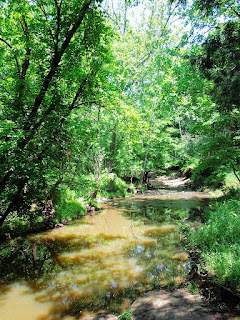 Crossing over Youngs Branch, a tributary of Bull Run. The stream probably looks just as it did when soldiers made their way through the woods 152 years ago. 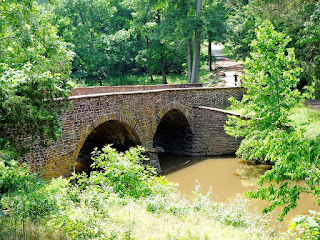 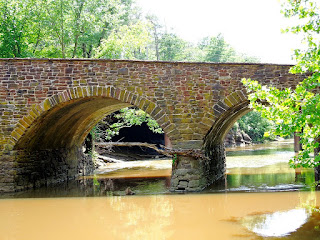 Two shots of Stone Bridge, the site of fierce fighting during the first battle, where it was destroyed by Confederate forces. Union troops crossed here on a temporary structure while retreating at the end of the second battle. The current bridge dates from 1884. 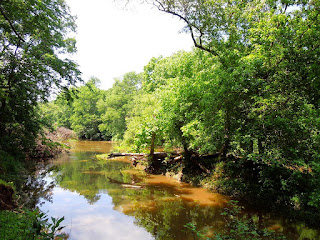 Bull Run, which lent its name to the two battles fought in the area. They're also known as the "First (and Second) Battle(s) of Manassas". 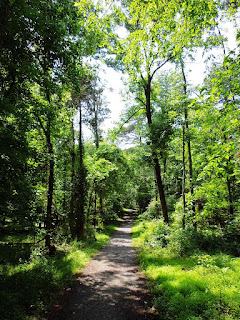 It was along this part of the trail that I caught site of the third deer. These woods were also the scene of fierce clashes between opposing forces, and it wasn't hard to picture soldiers making their way between the trees while preparing to engage the enemy. 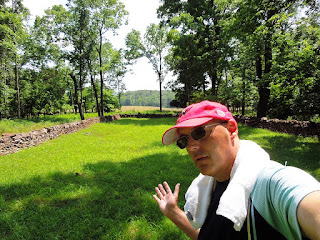 This self-portrait was taken in front of the Carter Cemetery. Several generations of Carters lie in the walled-off enclosure behind me, but there weren't any gravestones or other kinds of markers to indicate who was who, and where they were. I took this picture hoping ghostly images would appear around me, but once again the rational world has to suck the life out of the party. 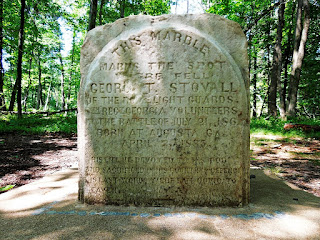 The George Stovall Marker marks the spot where a young soldier from Georgia was shot and killed. His last words were "I am going to heaven." 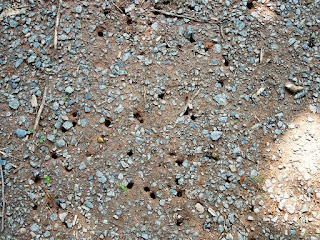 All along the trail could be seen the holes from the cicadas that emerged after spending 17 years living underground. 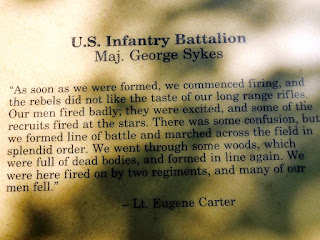 One of a number of markers along the route containing descriptions of the fighting by those who were there. 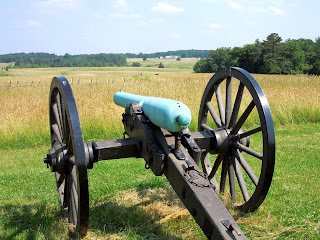 The First Manassas Trail emerges from the woods at Matthew's Hill, and the remainder of the path going back to the visitor center passes through the wide open fields where much of the fighting took place in the opening stages of the first battle. In the far distance, you can make out Henry House and the visitor center.

It was a long walk back through the fields. After all those years living in Japan and Taiwan, I'd forgotten just how wide and open spaces in the United States can be at times. It's what I love most about this country. 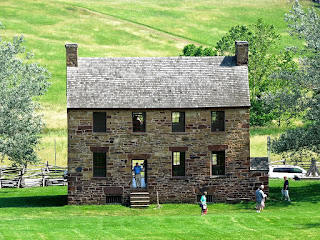 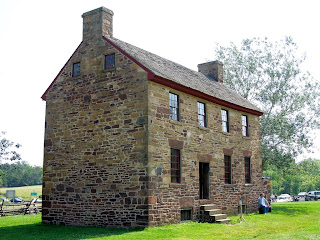 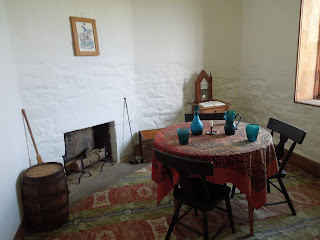 Three photos of the Stone House, an original farmhouse/inn that was used by the Union Army as a place to treat the wounded during the first battle. The house somehow managed to survive the battle intact, and has been restored to how it looked circa 1861. On the second floor could be seen the names of two wounded Union soldiers, which they carved into the floorboards while they were being treated. Eugene Geer later died due to complications from his wounds, but Charles Brehm ended up living to the ripe old age of 90. I don't know why I didn't get a picture of the carvings. 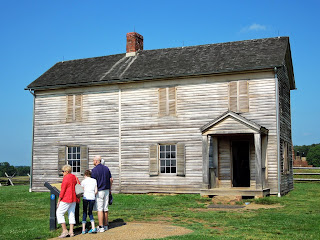 This building is a reconstruction of the Henry House. The original was badly shot up during the last stages of the battle. It was on Henry House Hill that the Union soldiers were pushed back by the Confederates, and began their disorganized, panicky retreat all the way back to Washington, D.C., along with the civilians who had come out to watch the fighting. 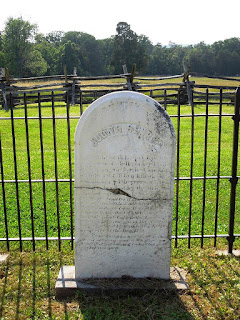 The grave of the house's matriarch, Judith Henry. The 85 year-old invalid was killed by a Union shell, which was meant for the Confederate snipers who were occupying her home. 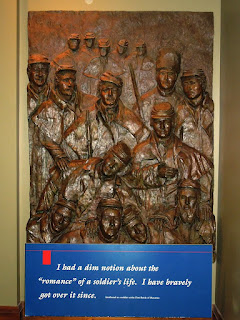 The last item of business before returning home to Falls Church was to check out the displays inside the visitor center. Soldiers on both sides of the First Battle of Bull Run were inexperienced and hopelessly naive, all believing that the war would be over quickly, with their side being the victorious one. What actually happened at the end of that day in July 1861 was that everyone realized that the war was going to be a long and difficult affair.