It's been lonely around here the past 3½ weeks. The girls have been back in Taiwan, and while I've been busy with work during the week, and trying to ride my bike as much as possible on the weekends, I'm long past the bachelor stage in life, and it would be nice to have the family back together again. Which should happen by the middle of next week, when my wife and daughter are scheduled to come back to Shànghăi 上海 from Fēngyuán 豐原.

I've received word that our next post is going to be in Vilnius, the capital of Lithuania, beginning in May 2016. This won't be officially confirmed until the middle of next month, but in all likelihood we're headed to one of the Baltic states after Shanghai. While my hope was to remain in Asia (preferably in Japan or South Korea, though Manila was also high on my list), I'm not complaining about this assignment. Vilnius was in my top ten, and it was the first choice for a European post. It'll mean having to learn Lithuanian, but I'm sure I'll like it more than Mandarin.

So we have about a year left in Shanghai. It's been a great post, but after all those years spent in Taiwan and now here, I'm done with living and working in Chinese societies. Today's bike ride only reinforced that feeling. I didn't mind the sweaty 30K+ round trip to the northern part of Shanghai (though I had some pretty bad leg cramps after coming home!), but in addition to the usual stress of maneuvering around careless drivers and clueless pedestrians, this afternoon I also had to deal with Hàn 汉 chauvinist convenience store clerks and petty-minded traffic wardens. I certainly could've (and should've) handled the situations in a more level-headed manner, but it'll certainly be nice to finally get away from all of this (I hope!). Unlike many of colleagues here, I don't intend on making China the focus of my career. The government may have different ideas, but for now, I'm going to enjoy the time remaining here before focusing on a different part of the planet. 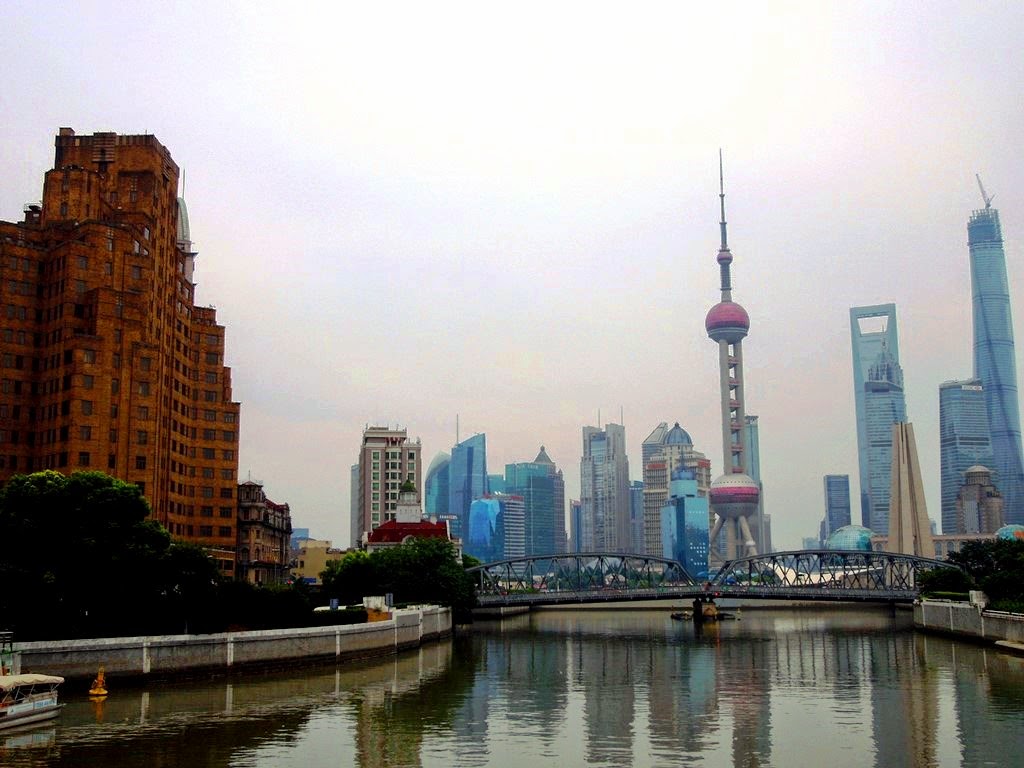 One of the classic views of Shanghai. The monstrosity on the left is the Broadway Mansions, an Art Deco mistake dating from 1934. 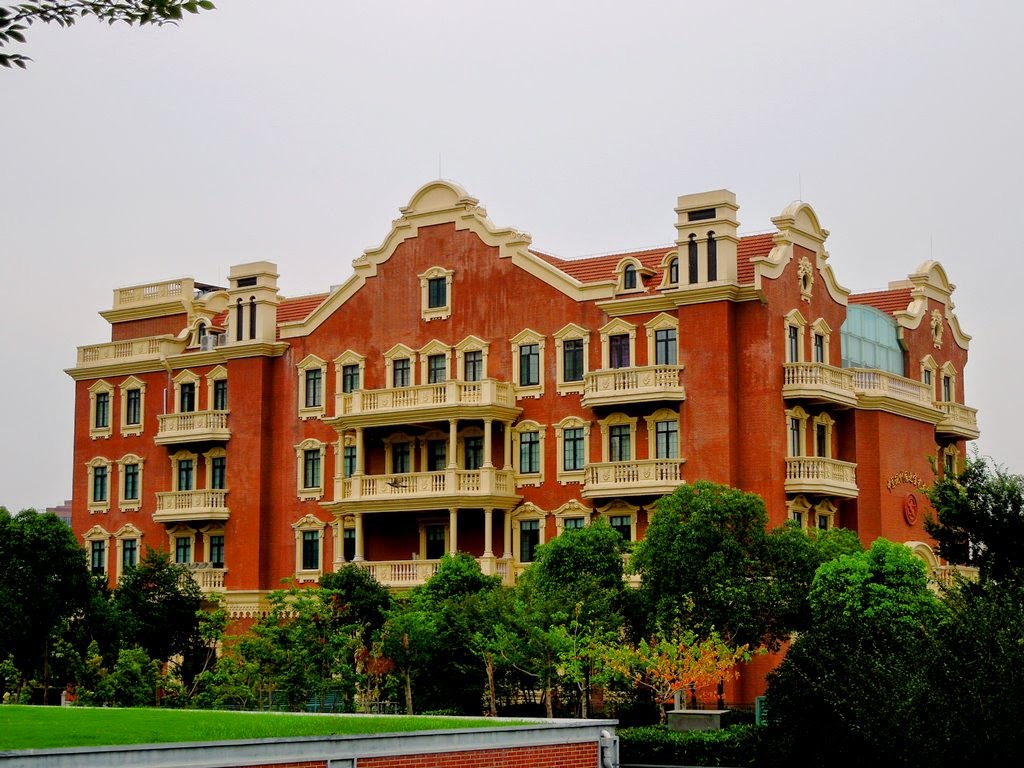 Not sure what this building is being used for, or whether or not it dates from the International Settlement era, but its appearance was much more pleasing to the eye than... 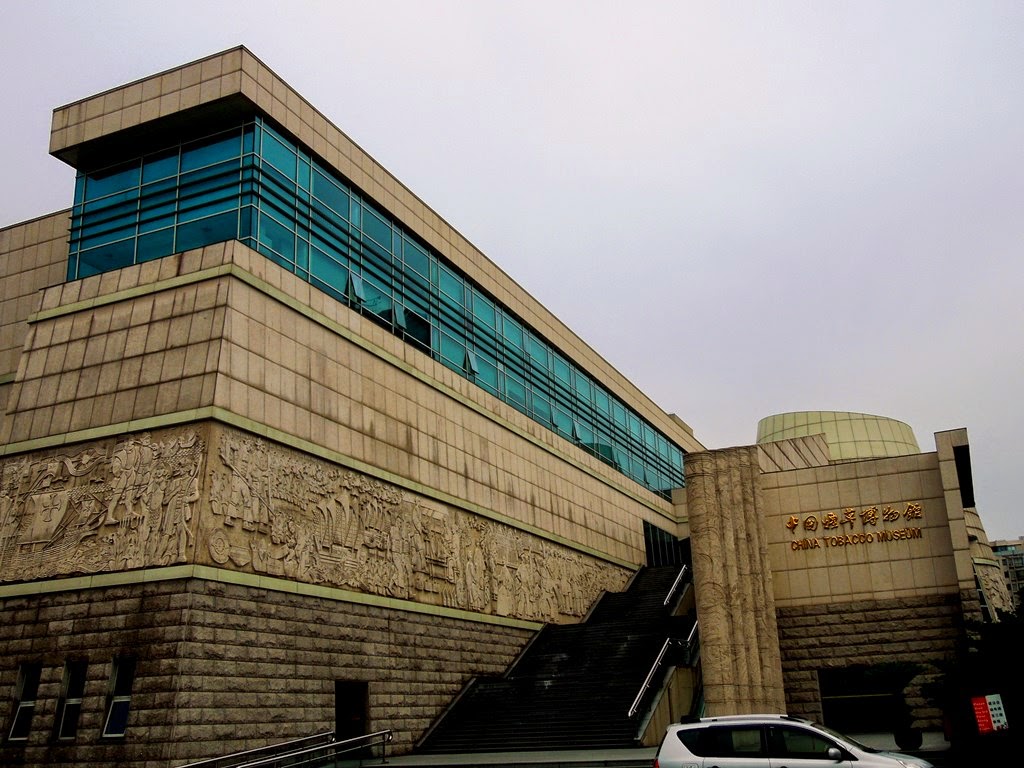 ...the nearby China Tobacco Museum. 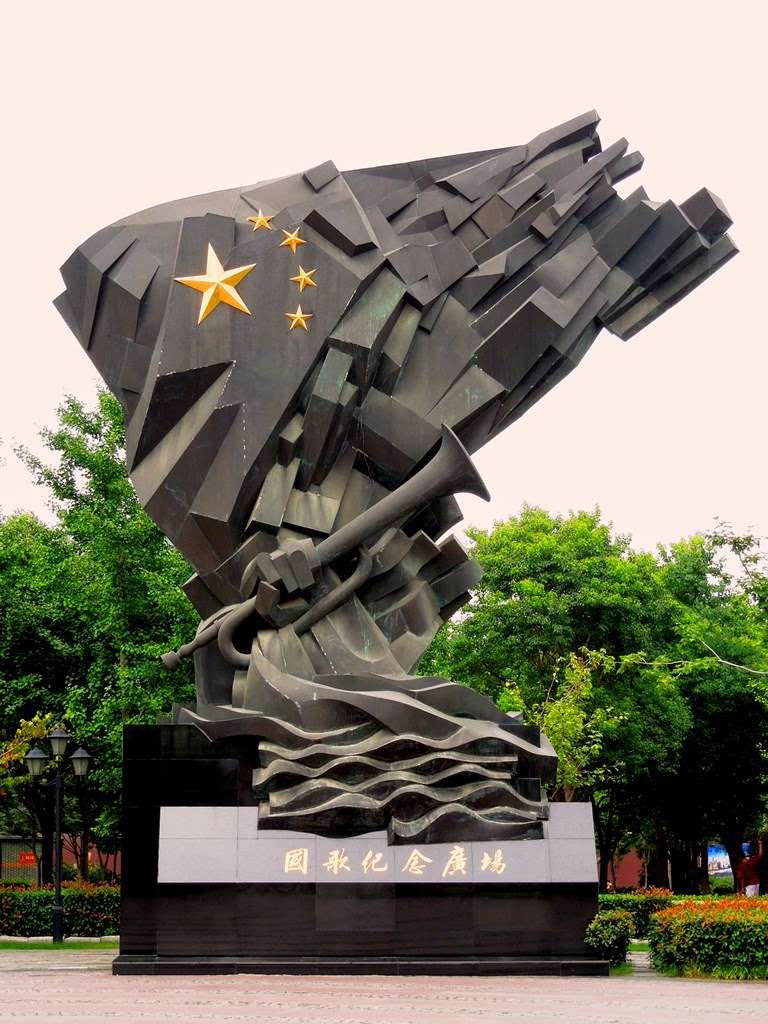 Shanghai's rapid development as China's commercial capital in recent decades has meant a disappointing number of  remaining Communist/Socialist "artistic" relics, but I did come across this at a park where I stopped for a water break. Appropriate as it was close to the National Anthem Gallery, whatever that may be. 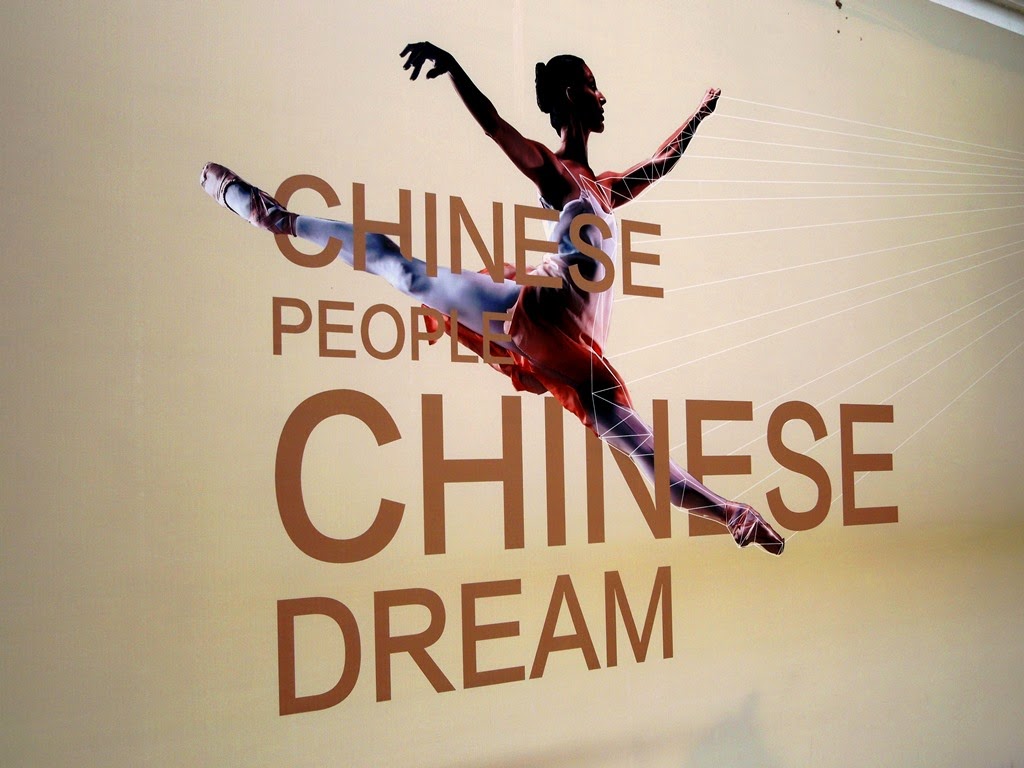 A wall sign outside a large construction site. Other panels referred to ideas of a "Beautiful Shanghai" and "Wise and Farsighted Innovation". The "Chinese Dream" 中国梦 is Xí Jìnpíng's 习近平 attempt to leave a lasting legacy when he eventually steps down from the offices he currently holds. Like much Chinese socialist thought, no one is sure exactly what it means. 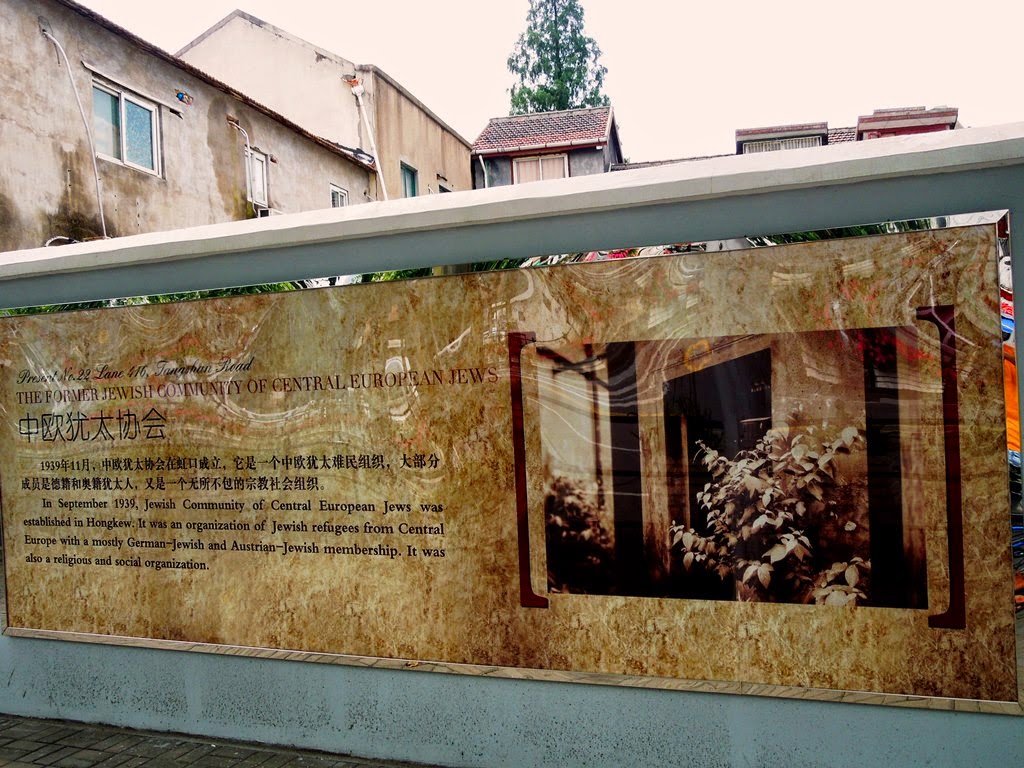 The area where I rode my bike to was once a sanctuary for Jewish refugees fleeing the horrors of Nazi persecution before and during the Second World War in Europe. Across the street from this wall is a museum devoted to Shanghai's Jewish history. I would've gone in to have a look, but I was a sweaty mess by this point. Something to save for another day... 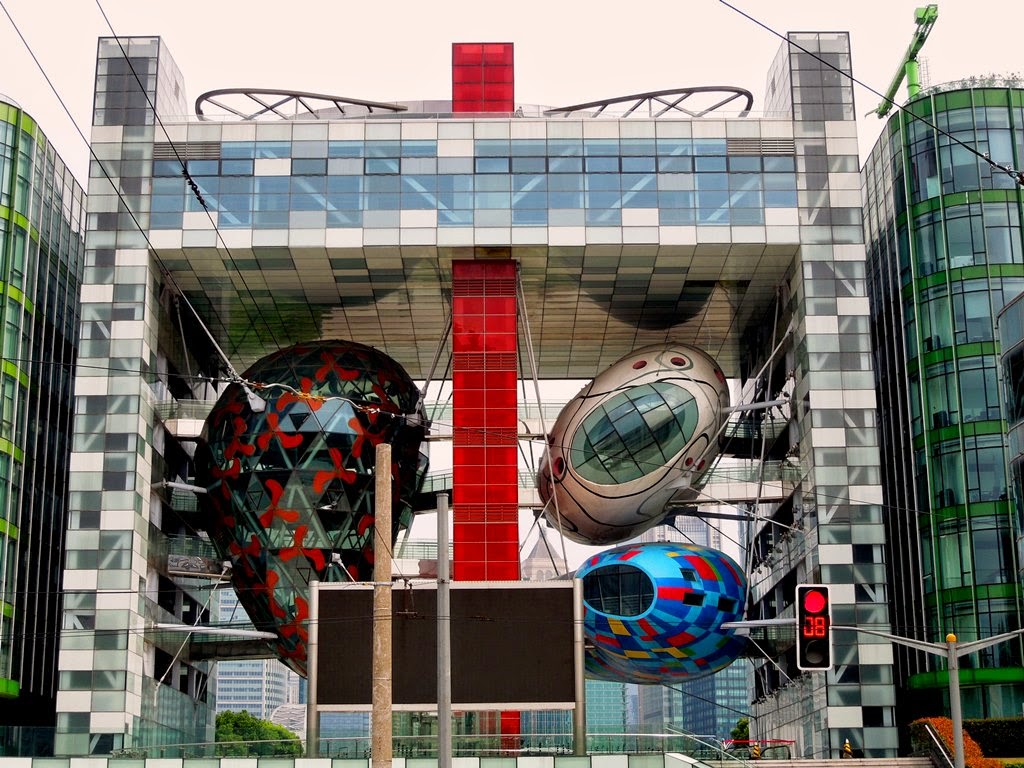 Shanghai in many ways reminds me of Tōkyō 東京 during the late 80's and early 90's - a booming city where anything goes when it comes to architecture. I have no idea of the purpose of this building - though it appeared to be almost finished, I couldn't find a name or any signs describing what it will be used for. 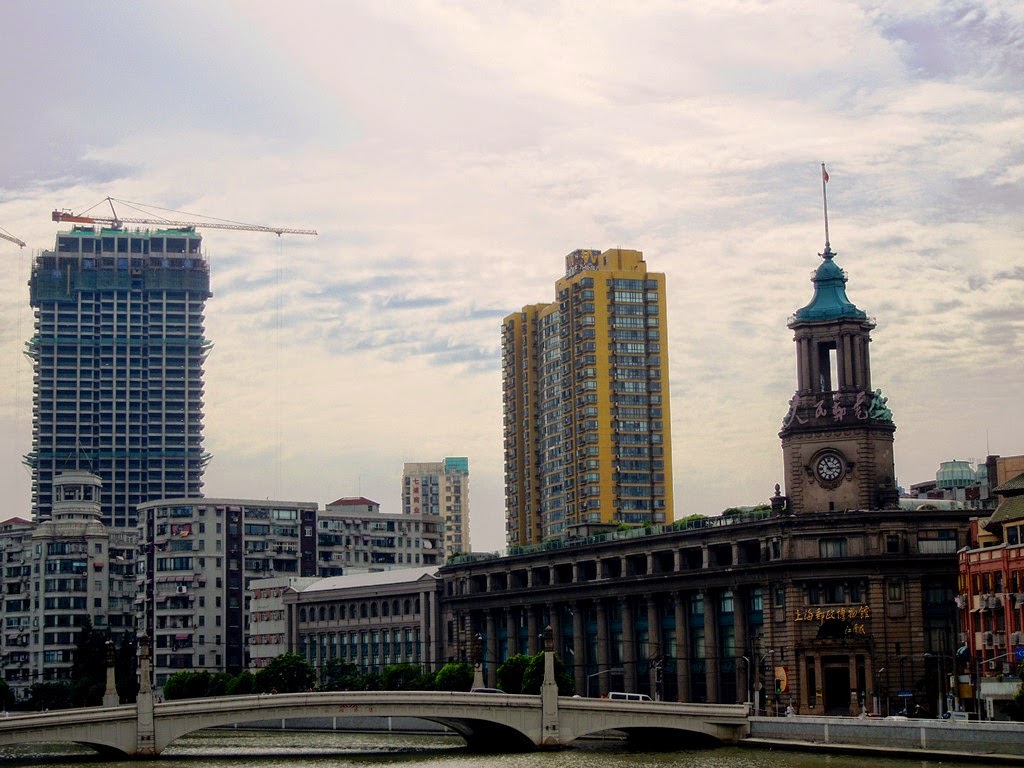 On the way back, crossing over Sūzhōu Creek 苏州河. The building on the right is the Main Post Office, which houses a mildly interesting Post Museum 邮政博物馆.