Having made it through the post-funeral, post-food poisoning blues, the family unit ventured outside yesterday on a chilly Saturday afternoon to Shànghăi's 上海 post-industrial waterfront area to have a gander at one of the city's up-and-coming art museums, the Power Station of Art. The suggestion to do so came from my now-nine year old daughter, who read about the gallery in an article in Connections, the in-flight magazine of China Eastern Airlines, while we were returning home from a weekend visit to Xiàmén 厦门 earlier this month (see here and here). Impressed with the photograph of the chimney-turned-thermometer, she expressed a desire to go, and once we got there yesterday, she led the way, guiding us from floor to floor, and room to room. Afterward, she declared the museum to be "fun", although she found some of the video installations to be disturbing. My wife, on the other hand, complained that the experience had cost her several hours of her life that she would never get back (from a woman who thinks the Mona Lisa is overrated).

And what was my take on the Power Station of Art, you're probably not wondering? Like most modern art museums, the exhibits were largely hit or miss. Some were interesting, a few even thought provoking; many others crossed the line into pretension, trying to hard to say something, anything. The biggest peeve I had wasn't with the installations themselves, but with the way the curators took it upon themselves to tell the viewers the meanings behind what they were looking at, instead of letting us interpret in our own ways what it was we were experiencing. Art, contemporary or otherwise, doesn't work well when someone is taking you by the hand and leading you around. 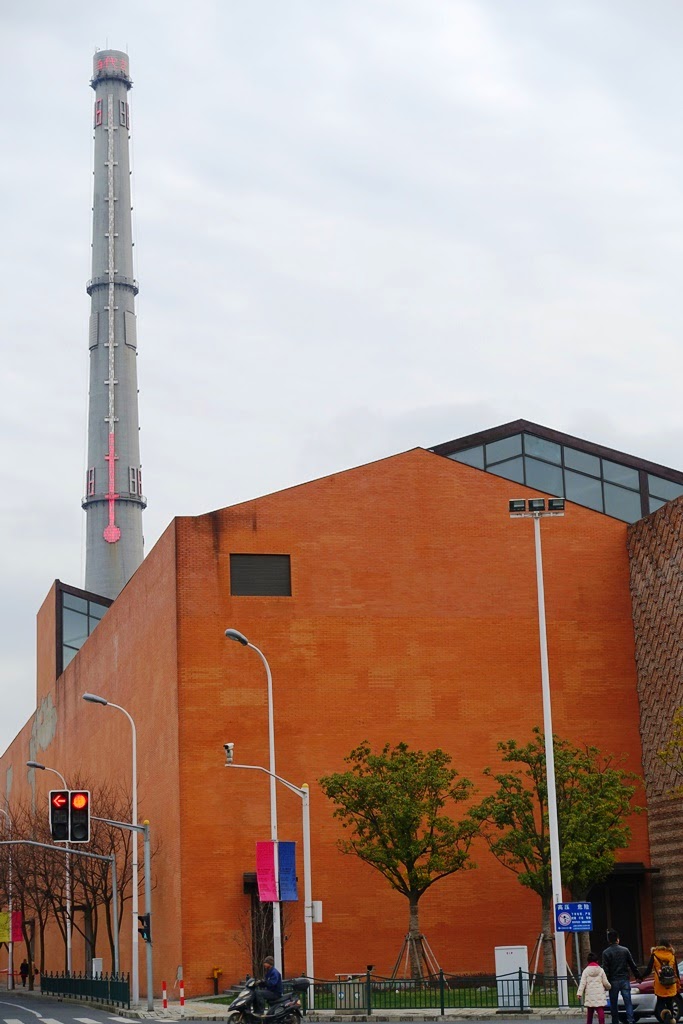 The Power Station of Art is housed in a converted power plant. The building is apparently over 110 years old. 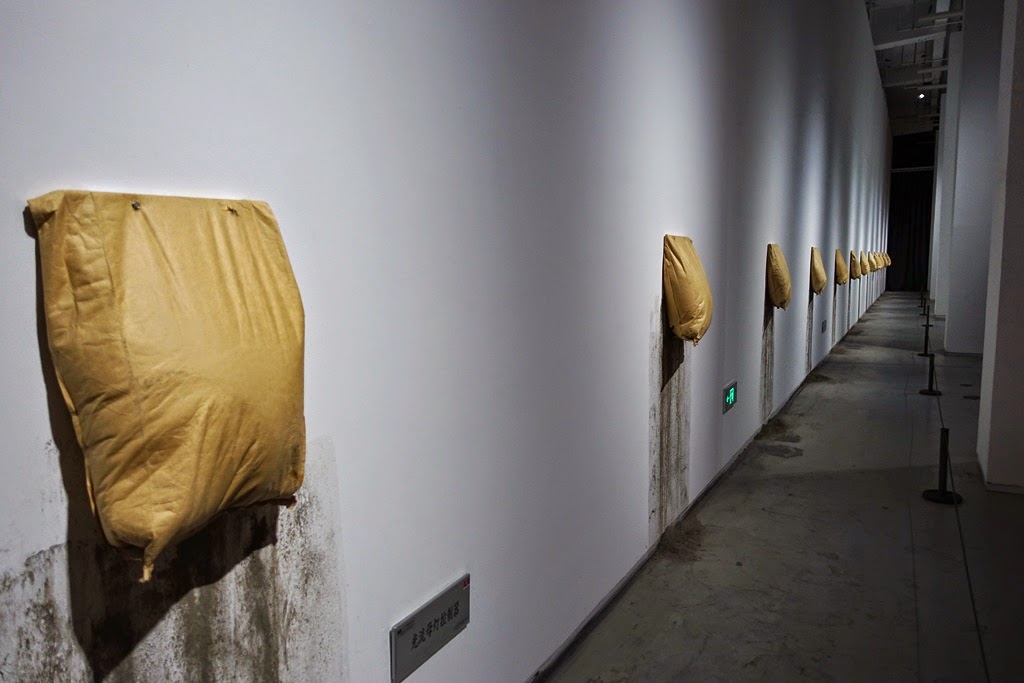 One of the exhibits that leased impressed Pamela. My wife said she could throw an egg against a wall, let the mess dry and then market it as "art". I wish she would - the additional income from her new-found fame could someday help pay for Amber's college tuition. 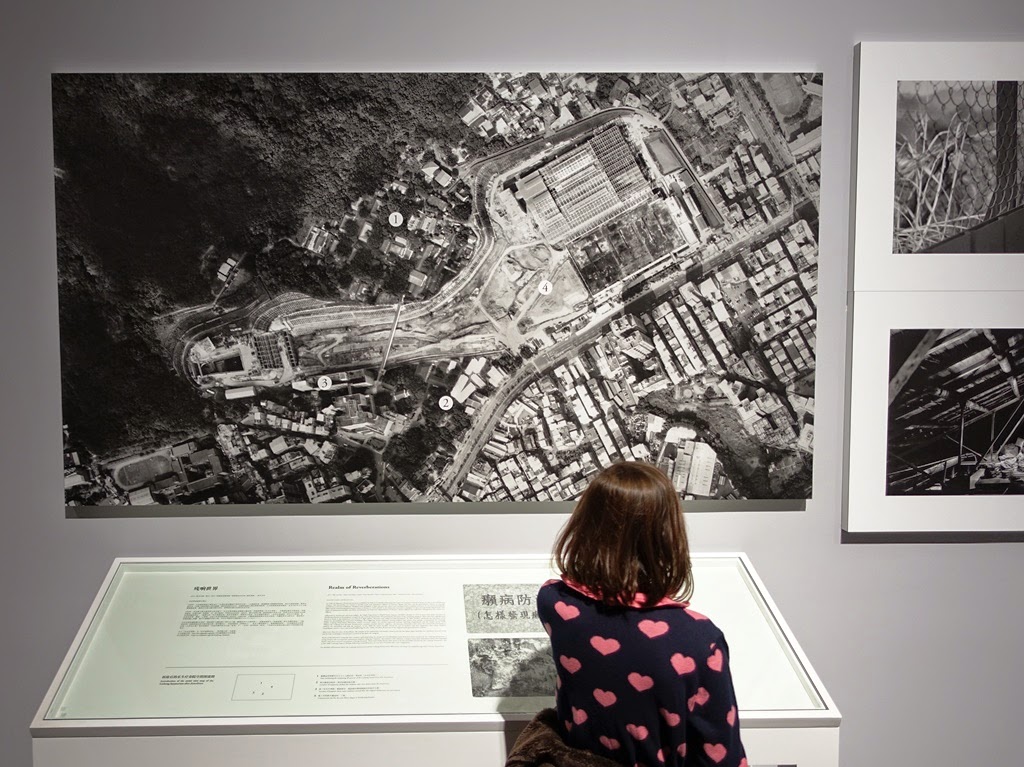 One of the more interesting exhibits was that by a Taiwanese artist whose name I unfortunately neglected to note down (let alone remember). His or her subjects included the Losheng Sanitorium 樂生療養院 issue and a photographic series on displaced factory workers struggling to get by in the Bādé District 八德區 of Táoyuàn City 桃園市 in Taiwan. 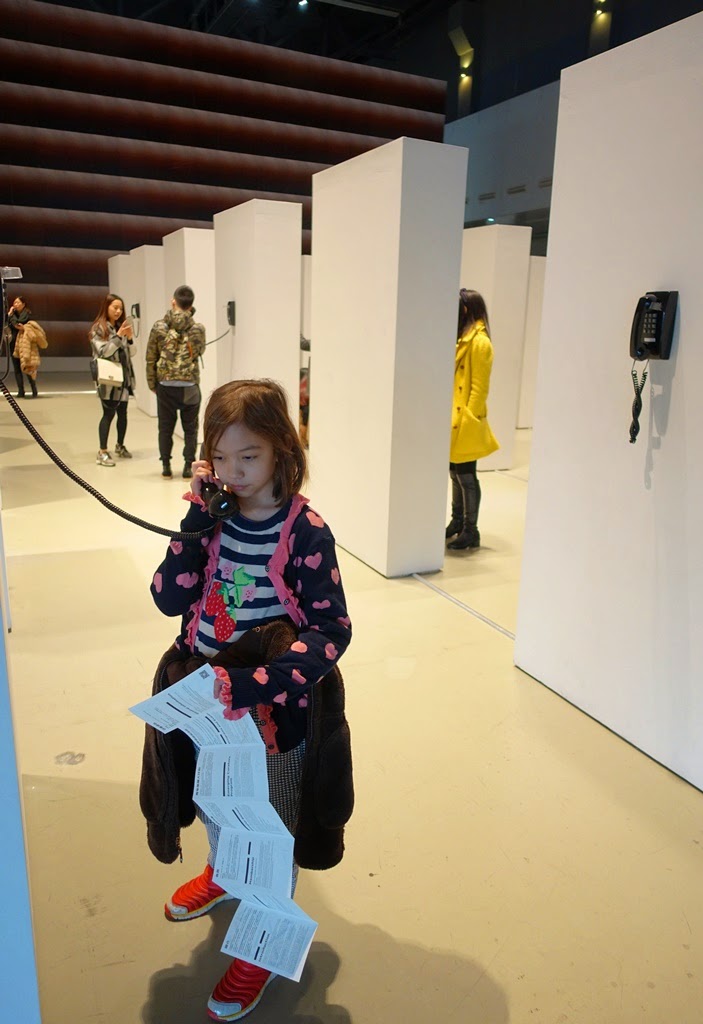 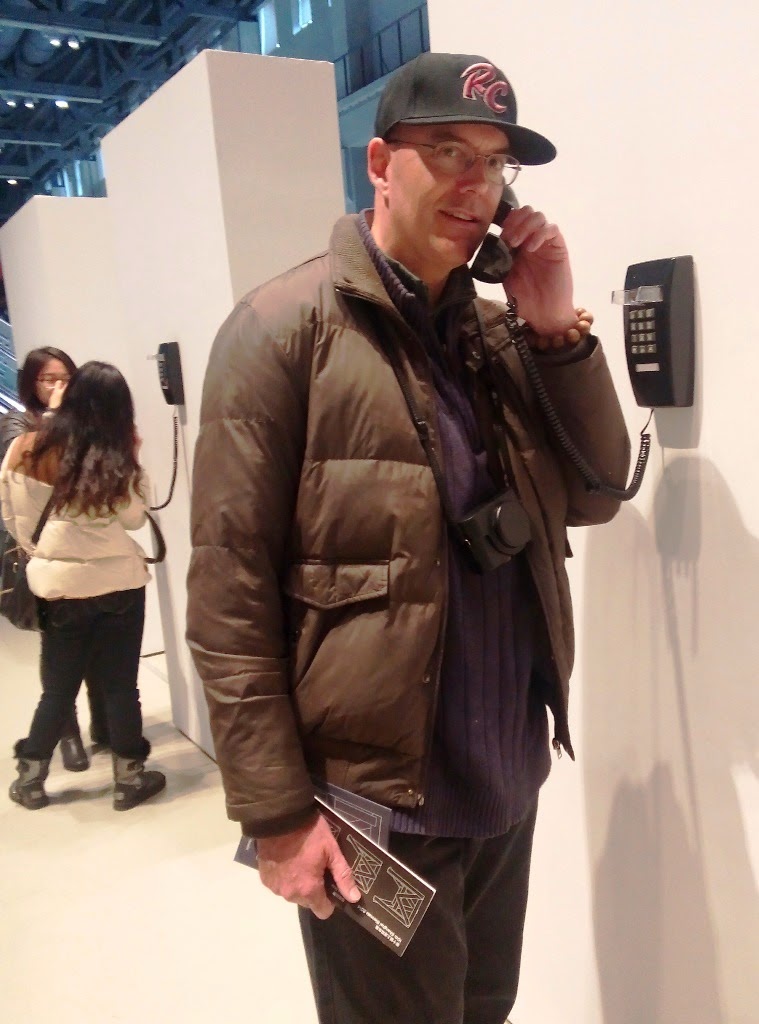 The sound installation work 1999 by Lu Ding. Amber preferred the phones that played music rather than the ones that had recordings of voices speaking. 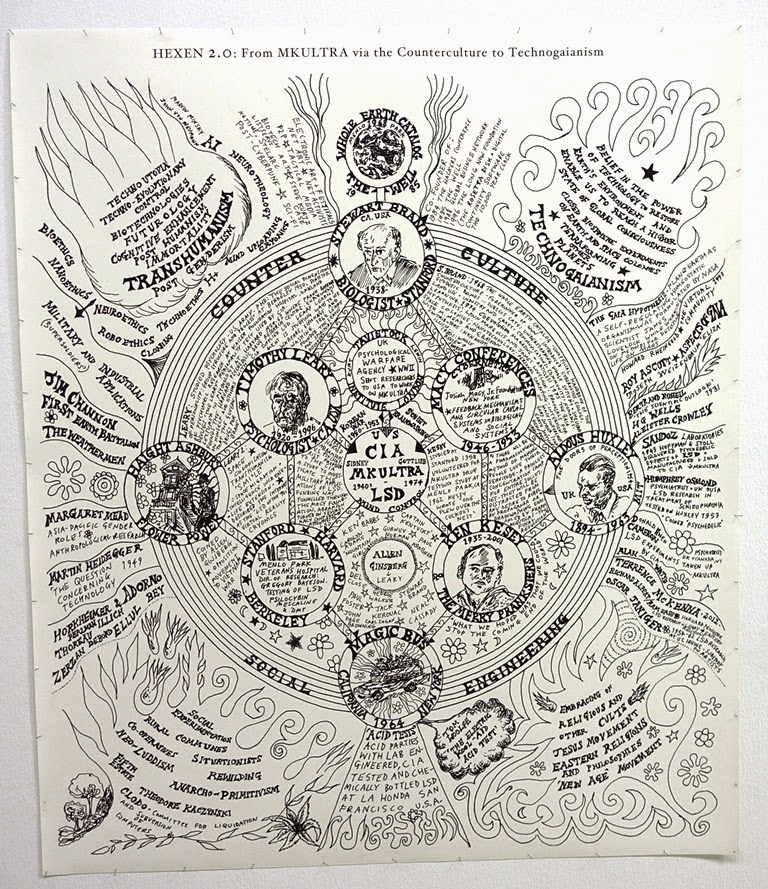 I liked this drawing not only for its technical skill, but because I was one of the few visitors at the museum that probably understood all the cultural references it contained. My daughter points out the ghostly faces superimposed over the images 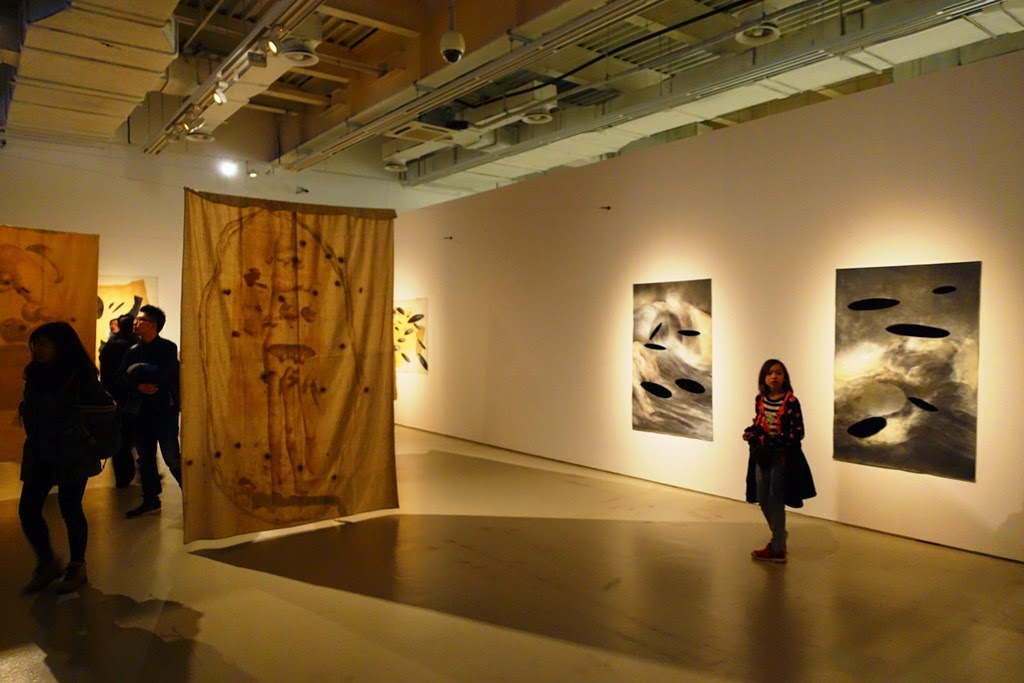 After careful examination, Amber concluded that the black disks in the pictures on the far right above were not, in fact, UFO's, but instead must be black holes. 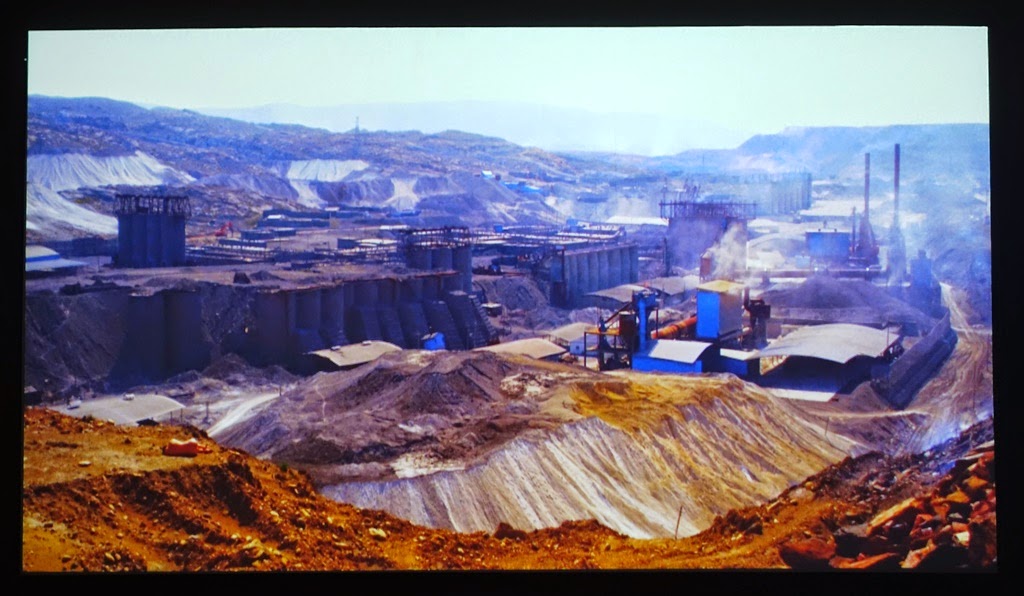 The video installation Black Face, White Face combined visuals of coal and limestone miners with images of their workplaces. The more observant of you may have already noticed the nude curled up in the fetal position in the bottom-left corner of the screen. 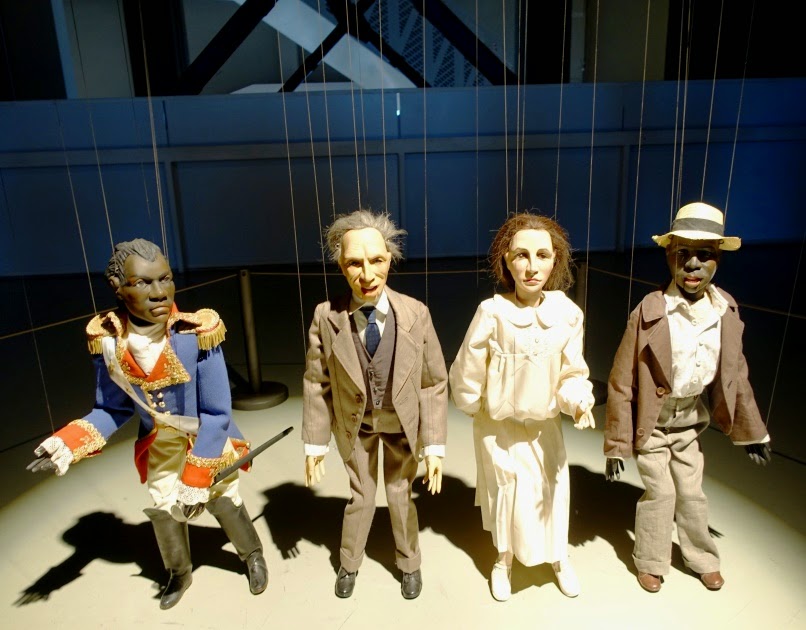 Puppet by Peter Friedl. Unless we're talking about the old Thunderbirds TV series, I consider marionettes to be right up there with clowns when it comes to creepiness. F.A.B. not! News Blues, in which live actors performed what sounded like Gregorian chants in Mandarin while reading newspapers. Ever the art critic, Pamela just smirked... 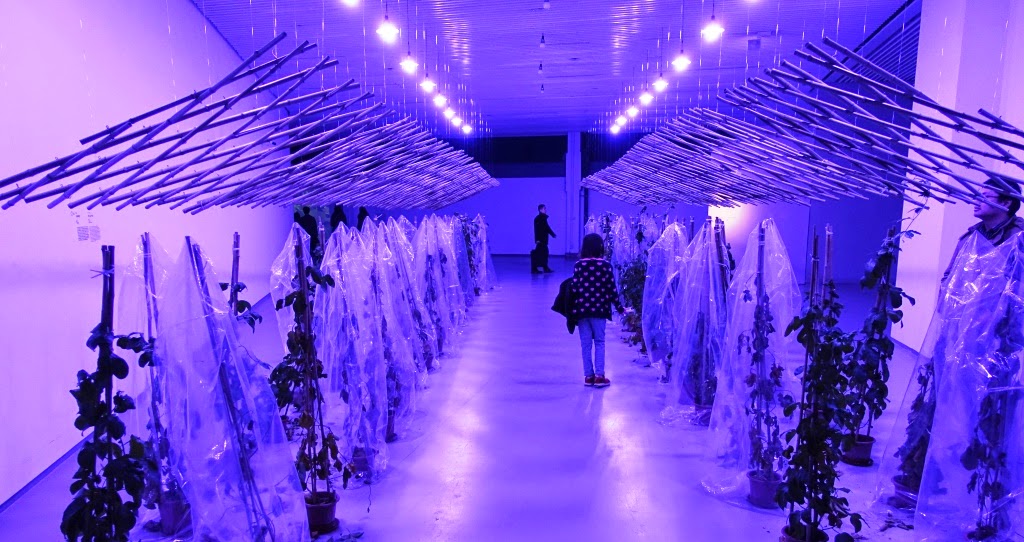 Passion fruit trees withering on the vine due to the lack of sunlight, suffering in the name of art. 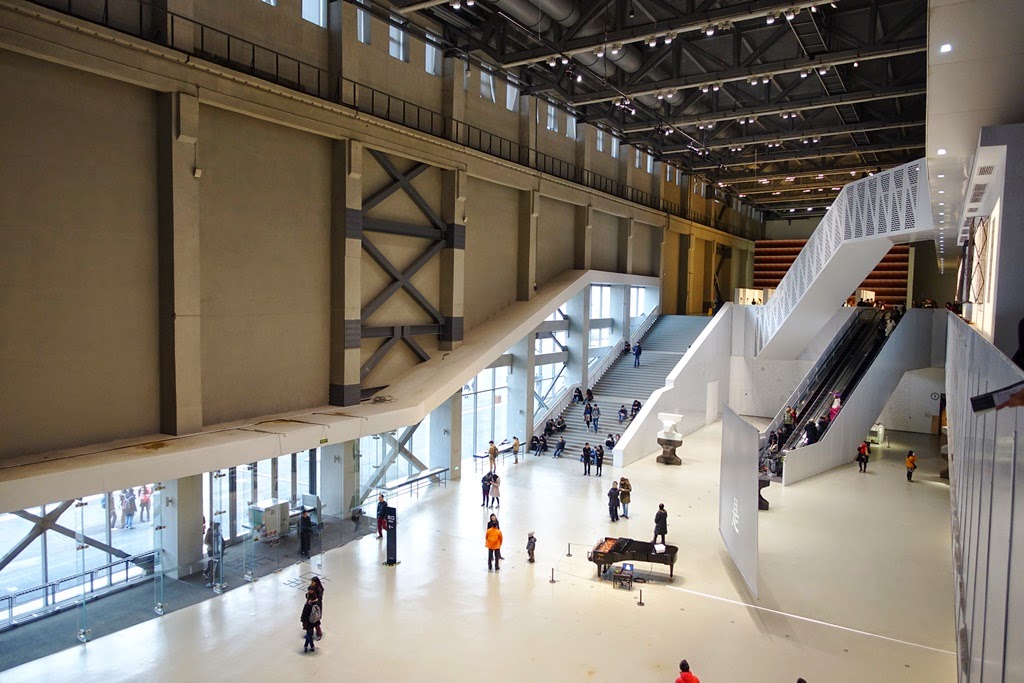 Being a former power plant, the Power Station of Art has plenty of open space, with a maximum unblocked height of 45 meters (148 feet). 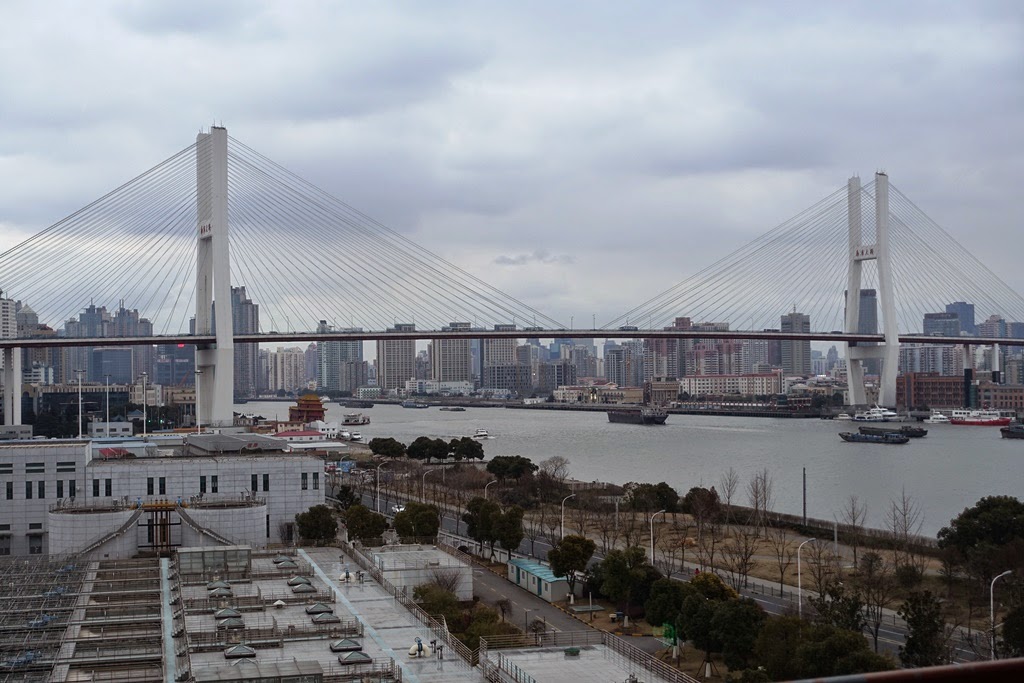 The view from one of the upper floor windows 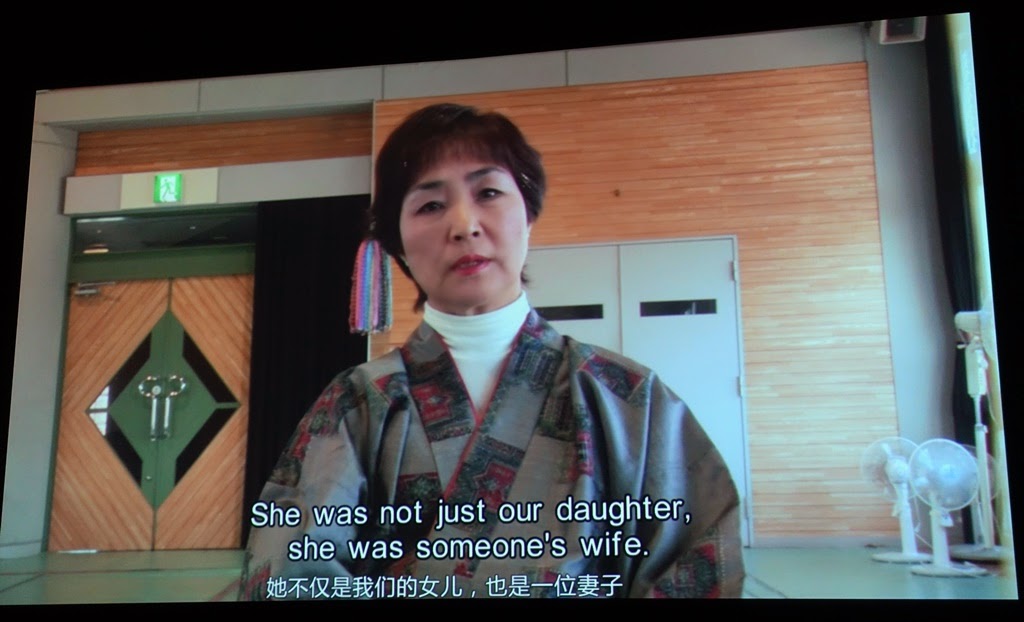 One of the most interesting exhibits for me was the video installation of residents of Kesennuma 気仙沼, Miyagi Prefecture 宮城県, Japan talking about the effect the March 11, 2011 Tōhoku earthquake and tsunami 東北地方太平洋沖地震 has had on their lives. 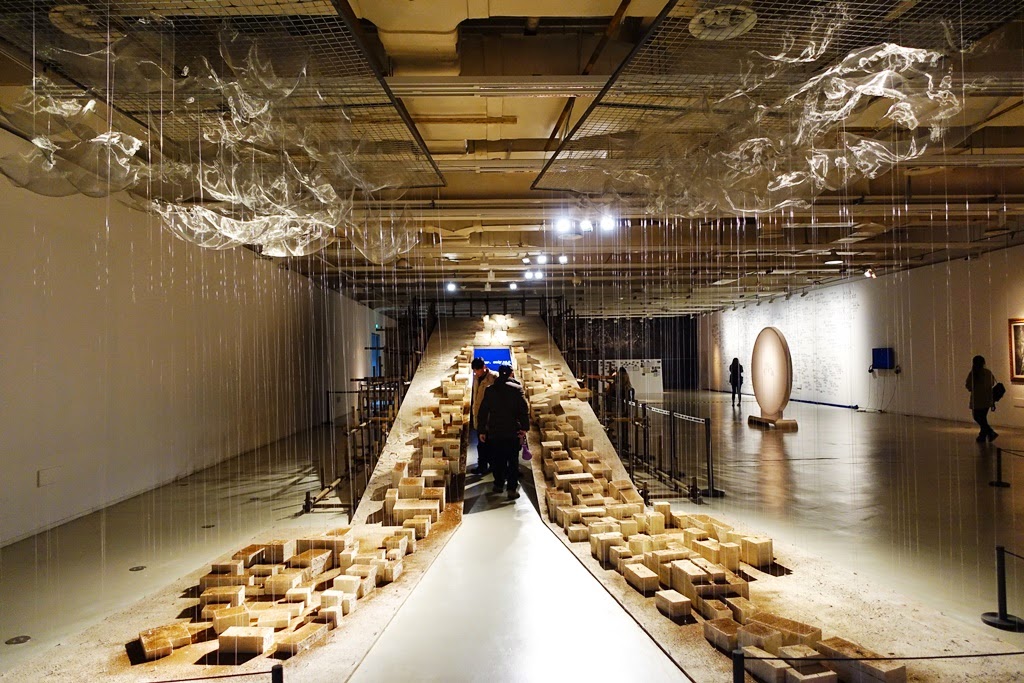 Another installation that I enjoyed contained aural and visual images captured from one of Shanghai's older neighborhoods. 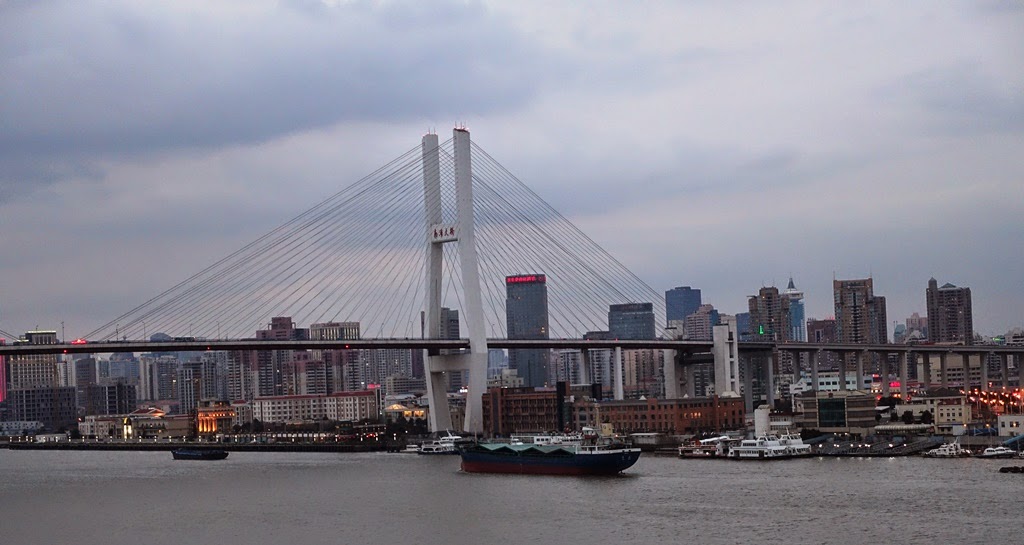 The sixth-floor roof had an outdoor terrace that we ventured onto despite the cold. The view overlooking the Huángpŭ River 黄浦江 was almost worth the price of admission.

These futuristic buildings are vestiges of Expo 2010, which was held in Shanghai. Fading posters of the event can still be found scattered around the city. 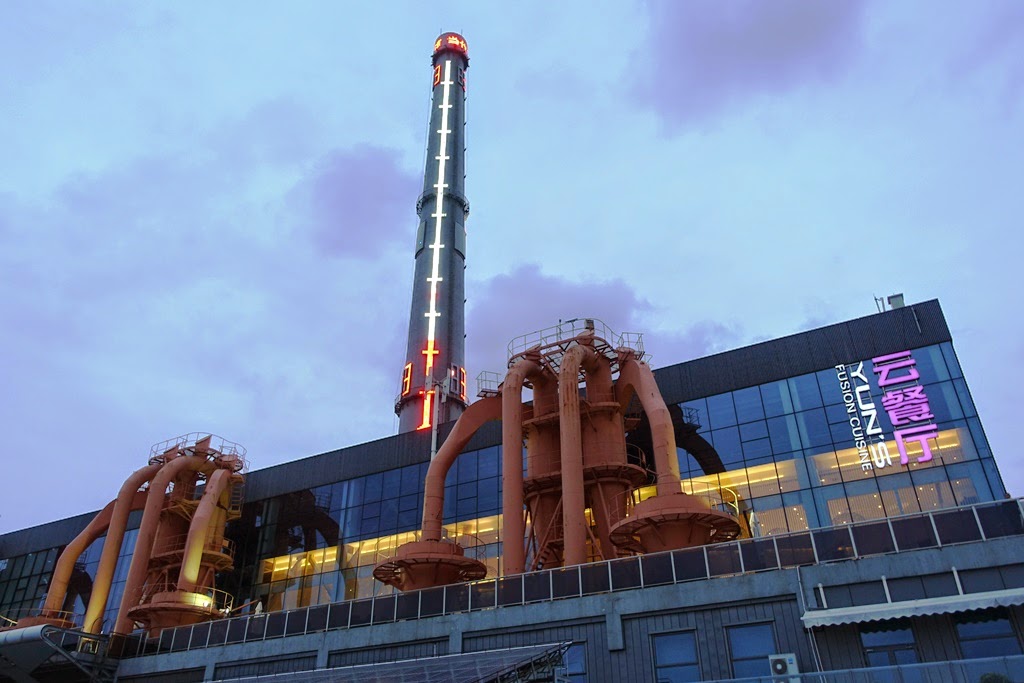 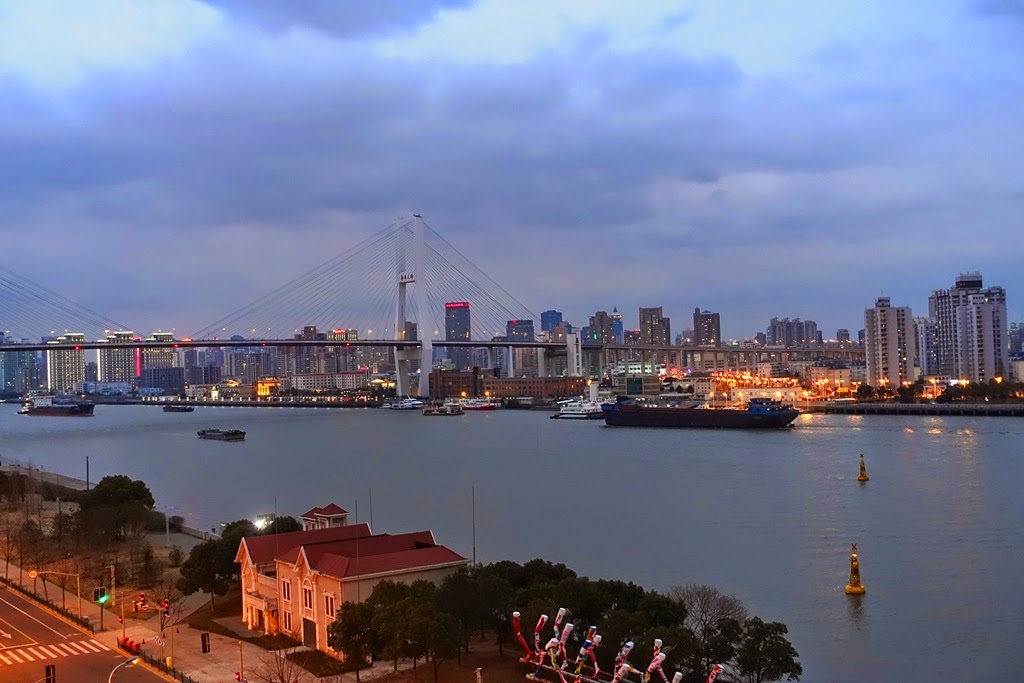 The 165 meter-high (541 feet) chimney that towers over the complex now acts as a thermometer. It was reading 3° Celsius (37° Fahrenheit) at the time were outside. There's a pricey restaurant on the top floor of the Power Station of Art, with a thuggish-looking security guard stationed on the floor below checking everyone's tickets to make sure nobody dared attempt to enter the museum from the even-more pretentious "fusion" dining establishment. "Provid(ing) the public with a platform for exhibition and study of contemporary art; remov(ing) the barriers between art and life; promot(ing) cooperation between different kinds of art and culture and creation of knowledge."

Now if they could only do something about the fascist on the 6th floor. Unless his presence was also one of the museum's installations...