On the Road, Part IV: Making a stand on the way to Mt. Rushmore

Sunday, August 30: We leave West Yellowstone, Montana for Keystone, South Dakota, gateway to Mt. Rushmore. It's a long drive, so to break up the monotony for my wife and daughter (but not for me; I could spend the rest of my days driving through the western U.S. and be happy doing so), we make a stop in Bozeman, Montana, to visit the Museum of the Rockies, which is operated by Montana State University. "Mike" the Tyrannosaurus rex is there to welcome visitors inside: 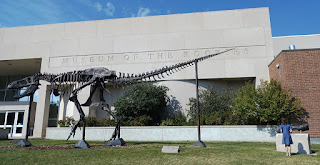 The museum has an impressive exhibit of dinosaur fossils, with pride of place going to its collection of triceratops skulls. For Amber, who hasn't yet outgrown her childhood interest in the terrible lizards, it was one fascinating display case after another: 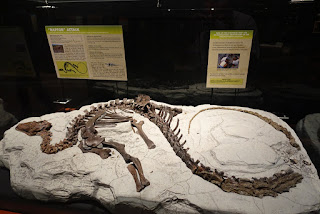 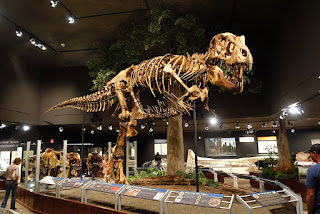 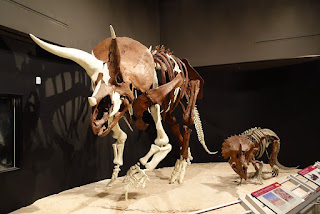 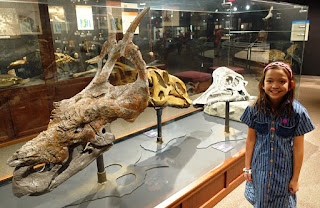 But it wasn't all dinosaur bones at the museum, though the state of Montana seems to have them in abundance. There were also exhibits on Native American culture, life in Montana through the decades (including a mock-up of a roadside filling station from the 1930's, pictured below) and, a little incongruously, a special exhibition on the history of chocolate (not one of the Big Sky state's noted products): 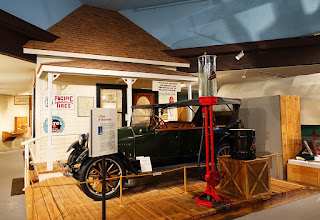 After visiting the planetarium, we emerged outside and back into the inspiring Montana scenery...and "Mike": 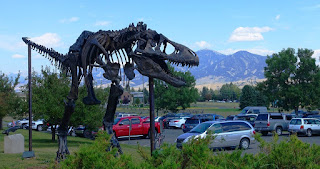 Next door to the museum is an old farmhouse built in the late 19th century and which was still lived in until the 1960's. Still containing much of its original furnishings, it gives a good idea of what life was like in the past. Conclusion: I'm glad I live in these days and times: 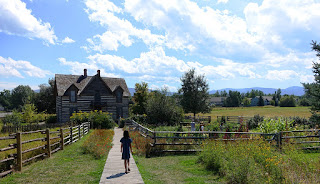 Being a college town, Bozeman doesn't lack for cool places to eat, and it didn't take long to find a cafe specializing in organic dishes (Montana has more than kept up with the times). Fortified, it was back on the road for several hours of driving on Interstate 90, before deciding to call it a night in Billings, the largest city in the state. The historic downtown area where we would stay was pretty quiet on this Sunday night, but the Montana Brewing Company was still open for business, much to my appreciation. The worst thing about being the designated driver on a cross-country trek is the enforced sobriety that that entails (at least while behind the wheel): 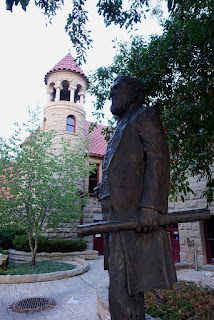 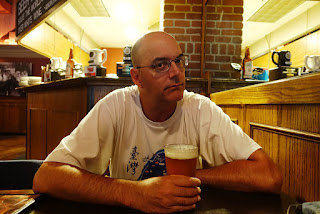 We checked out of the hotel the following morning and said adieu to Billings, still a week away from our ultimate destination in northern Virginia. A short drive east is the Little Bighorn Battlefield National Monument, where Lieutenant Colonel George Custer and 262 of his 7th Cavalry Regiment soldiers were wiped out in the famous battle that took place there on June 25-26, 1876. The excellent visitor center is yet more evidence that the National Park Service has got to be the most under appreciated organization of the federal government (after my present employer, of course). Outside, a ranger gave a dramatic description of what happened during the battle, with Last Stand Hill in the distance: 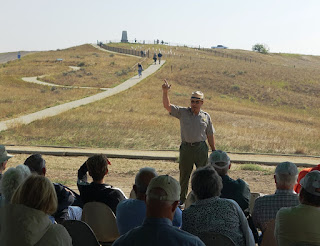 Last Stand Hill is marked with stones placed where soldiers' bodies were found after the battle, including Custer's. Around 40 men were killed on the hill, though the evidence indicates it wasn't the classic "last stand" that's been so often portrayed in film and literature. Custer and his men on Last Stand Hill were overwhelmed relatively quickly by the superior forces of Plains Indians; the remaining soldiers apparently died in a series of smaller "last stands" or were cut down as they tried to flee in panic. The battle most likely was over in less than an hour: 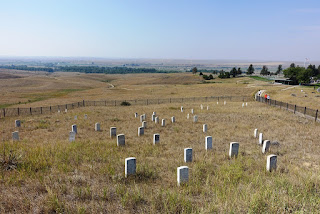 At the top of the hill stands an obelisk containing the names of the soldiers: 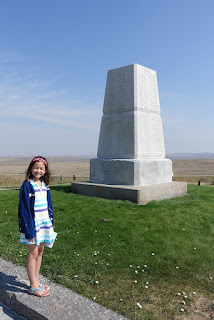 In recent years belated efforts have been made to show that there were two sides in the events that took place at Little Bighorn. The Indian Memorial stands adjacent to Last Stand Hill: 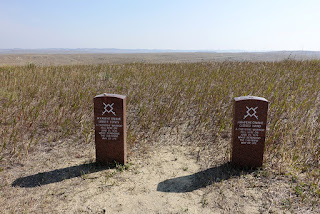 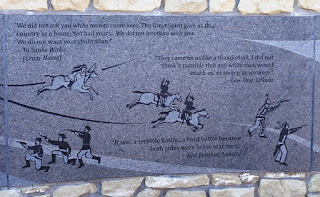 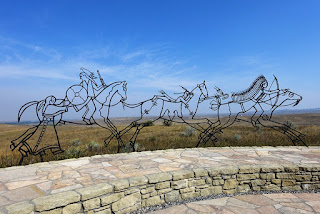 Little Bighorn is one of those places I wish we'd had more time to explore (the actual battlefield is quite large, and the fighting in which Custer and his men were wiped out was just one part of the overall battle), but we had a long drive to Mt. Rushmore ahead of us. Had our car been more reliable, I would've preferred driving along US 212 (the road pictured in the background in the photo below), but the lack of amenities on that stretch of highway meant it was better for us to continue along I-90: 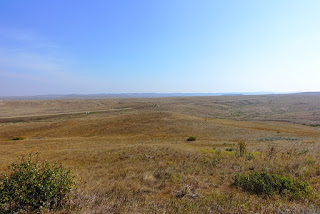 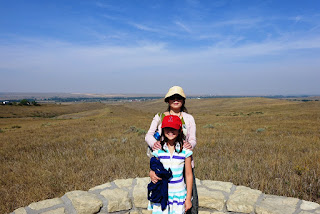 The rest of the drive was uneventful, as we drove first through the stunningly beautiful emptiness of Wyoming...: 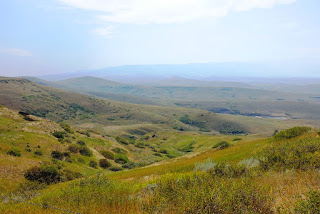 ...and then entered South Dakota, just outside of Black Hills country: 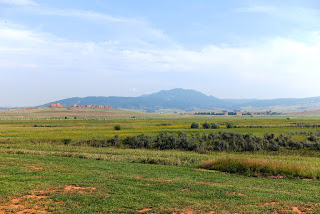 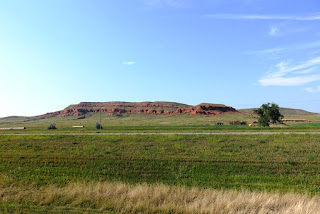 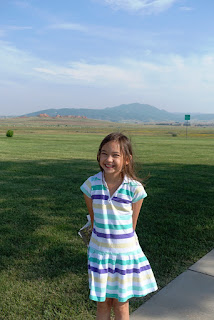 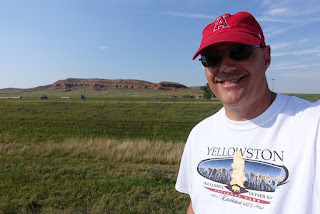 We reached our hotel in Keystone, the Lodge at Mount Rushmore, while there was still some daylight left. The end of a long day on the road was celebrated with a meal of bison, elk and craft beer at a restaurant down the road: 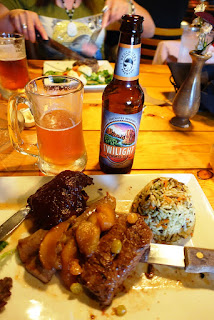