Tomorrow will be three weeks since we've been back in Falls Church. I've started studying Russian in preparation for my next post in Vilnius, Lithuania. For those of you wondering why I'm not learning Lithuanian, considering that it's the national tongue of that country (Russian speakers make up only about 7% of the population, considerably fewer than in the neighboring Baltic republics of Latvia and Estonia), well, that's a good question. I was originally enrolled in the Lithuanian course at the Foreign Service Institute, but a reevaluation of the consular position led to my being placed in the Russian program instead. The rationale for doing so is that Lithuania is part of the Visa Waiver Program, meaning most Lithuanians do not require visas to travel to the United States. More importantly, the scaling back of consular operations at the U.S. Embassy in Minsk due to the sour relationship between Belarus and the U.S. means that Belarusians who wish to go to the U.S.A. have to apply for visas in a third country, with Lithuania and Poland being the closest neighbors. Russians living in the Kaliningrad enclave also likely visit Vilnius for visa interviews. Hence, Russian will be a more useful language for when I'll be doing visa interviews at the embassy. I've been told that I'll be able to receive Lithuanian language lessons after I arrive in Vilnius, and that English is widely spoken among the younger generation there. We'll see.

Meanwhile, Russian is proving to be brutal but interesting. Our class has been spending its time learning to read Cyrillic and, worse, Russian cursive. The grammar is also proving to be complex, certainly a lot more difficult than, say, Mandarin Chinese. Nonetheless, I'm enjoying it...so far. I have seven months to learn the language sufficiently well enough to pass the grueling final exam. Everyone tells me that knowing Russian will open up a lot more positions in the future, but I'm not sure I want my career path leading me to destinations that end in the suffix "-stan".

My daughter has started the fourth grade in Falls Church, and seems to be enjoying it so far. She's also boning up on traditional Chinese characters every Sunday afternoon at a Chinese school that operates out of the local high school, one of the drawbacks of being a cross-cultural kid. Amber has also joined the local Go club and we're trying to find a pool where she keep on swimming now that our apartment complex's pool is about to close for the season. As for my wife...seeing as she's always kept her cards close to her chest, it's hard to tell how she truly feels about our current living arrangement. I haven't been murdered in my sleep yet, so I'm taking that as a good sign.

The last time we were here, we did a lot of exploring in the Washington, D.C. area, visiting many of the region's famous sightseeing spots. I did a lot of hiking and walking as well, and while in Shanghai was looking forward to doing so here again. So it was that a couple of Saturdays ago, I unpacked my trusty AMC's Best Day Hikes Near Washington, D.C. guidebook and resumed my outdoor (mis)adventuring. I decided to begin with one of the "easy" hikes, the 12-mile (19 kilometers) walk along the Washington and Old Dominion and Cross County Trails. The W&OD Trail is a paved bike/foot path that follows the former tracks of the Washington and Old Dominion Railroad for 45 miles (72 kilometers) through northern Virginia. I picked up the trail from the community center parking lot in Vienna; less than a mile into the walk, I passed by the 1859 Vienna train station, celebrated with a brightly-painted wall mural:

The trail was busy that Saturday morning with cyclists, joggers and walkers, and I was constantly being bombarded with cries of "On your left" from passersby. One of the drawbacks of returning to the U.S. soon became apparent: after years of being able to ignore what was going on around me in places like China, Japan and Taiwan, I now find it harder to tune people out when they're speaking in my native language. Having to listen to snippets of conversation on topics such as workouts, diets, marathon times, mapping of cycling routes and sons' high school cross-country teams drove home the fact that suburban Americans inhabit their own universe, quite different from the realities lived in by other people elsewhere on this planet: 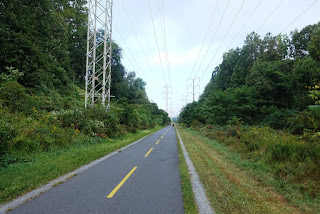 There was no need to stop on this particular Saturday morning: 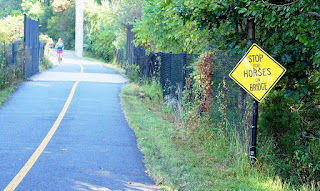 Signs along the trail introduce some of the local wildlife. I didn't see any groundhogs, but I did encounter numerous squirrels and small birds (plus the occasional hawk). I also saw a deer while on the Cross Country Trail, running at full speed through the woods, necessary seeing as signs along that trail warn hikers to stay on the footpath as it's now deer-culling season (though hunters have to use arrows and not firearms): 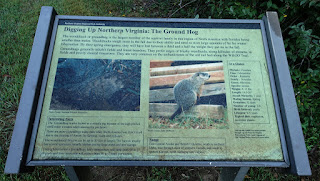 At the 3-mile (4.8 kilometers) point into the walk, I swung right onto the Cross County Trail: 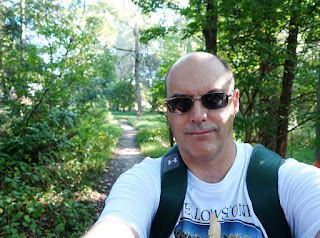 The CCT is 40 miles (64 kilometers) in length, connecting Fairfax County from north to south. Unlike the W&OD Trail, the CCT isn't paved, though there were plenty of cyclists on mountain bikes riding through the  woods: 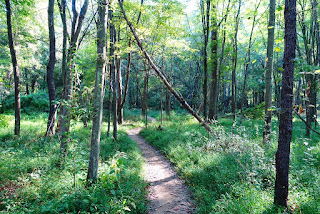 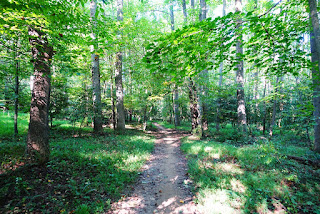 The CCT in this area runs parallel with the Division Run stream: 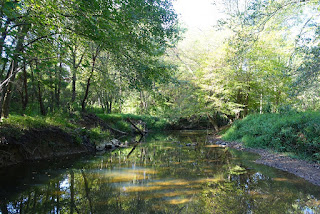 Though there were times when it felt like I was getting away from it all, civilization is never far away, as I was reminded when the trail passed under the busy Dulles Toll Road...: 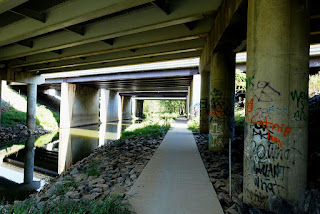 ...and later through an affluent suburban neighborhood. It was in this area where I encountered the deer: 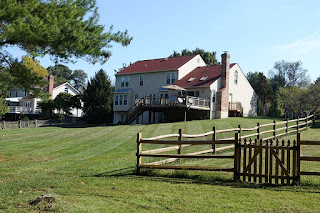 I reached the halfway point (six miles; 9.7 kilometers) about 2¼ hours into the walk. The midpoint was supposed to be marked by a visit to the historic Colvin Run Mill (1813), but it was located across busy Leesburg Pike and I didn't feel like waiting for a break in traffic when there wasn't a pedestrian crossing. Instead, I turned around and retraced my steps on the Cross County Trail to where it rejoined the W&OD (at about the nine-mile/14.5 kilometer mark). And it was at that particular point that my legs and feet rebelled. Several factors were involved: 1.) I'm out of shape, and asking my body to walk 12 miles was probably too much; 2.) While the natural surface of the CCT was fine, the hard asphalt of the paved bike trail was murder on the soles of my feet; and 3.) I've always had poor mechanics when it comes to walking, and at my age, it appears it's starting to have an effect. For whatever reason, the last three miles back to the car were more brutal than dealing with Russian grammar.

Despite the discomfort, there was no choice but to soldier on. At places there were interesting historical markers to briefly take my mind off the fact that miles are much longer than kilometers: 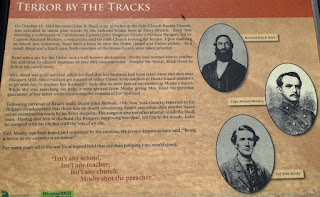 My good deed for the day was helping this turtle cross the W&OD, namely by alerting a couple of passing cyclists to its presence: 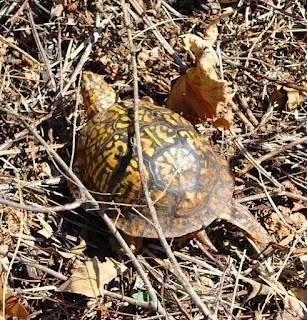 The historic Freeman House is a local museum and gift shop that looks like it might be good for a quick visit, but on this day my feet and legs only wanted to get back to the car, so I gave it a pass: 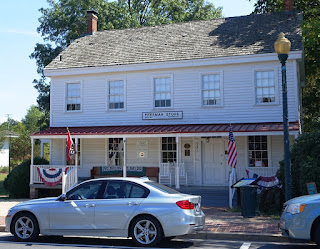 Time: 4½ hours. Distance: 13 miles/21 kilometers (when I first arrived at the community center, I made a wrong turn, which added another mile to my walk). Number of days feeling stiff and sore afterward: Several. Still, after two years in the urban spaces of Shanghai, it feels great to be back in an area where access to green spaces is only a short drive away.

And maybe all those negative ions will help me remember how to conjugate Russian verbs...